Wrath of the Titans

Sam Worthington, Ralph Fiennes and Liam Neeson star once again as gods at war in "Wrath of the Titans," under the direction of Jonathan Liebesman for Warner Bros Studios.

MPC VFX Supervisor Gary Brozenich and Producer Oliver Money led MPC’s team delivering 280 shots for the movie. MPC’s main areas of work included; the opening Dream Sequence, the Chimera attack, the final battle with Kronos, the Makhai warriors and Pegasus, as well as the Gods dying and dissolving, full CG temples, set extensions and a number of stunning DMP’s throughout.

One of the first challenges the team faced was to bring to life Kronos, the fearsome King of the Titans and Father of Zeus, Hades and Poseidon. For the initial concepting stage of creating Kronos, the brief at first was quite open, allowing MPC's Art Department to go back and explore Kronos within Greek mythology.

Understanding that Kronos was the Titan God of Time and Ages, the team chose this direction as a starting point and began to collect references and produce exploratory sketches based on these descriptions.

Through exploring Kronos through a series of images, various avenues were investigated, from a more elemental creature through to a more human-like giant. Ultimately it was decided that Kronos should have a more human form to help reiterate the connection between him and his sons rather just being seen as a monstrous titan. The concept art team then expanded on some of their original ideas of using volcanic rock as a base (as it relates to how something could develop and grow over time) and Kronos evolved from there.

Once the direction had been decided, a texture reference was then created and used as a base for the 3D modelling and texturing pipeline, which was then used as a point of reference for the rest of the team.

A variety of clay mixtures were created and painted onto the face and body of an actor, which were then used as a reference point by MPC's modelling team to understand how magma and volcanic rock might move and fall around a moving object. The textures were also used for creating believable crack and displacement maps.

As an FX driven creature, MPC’s team was faced with the huge challenge of creating various behavioral effects elements including spraying and flowing molten lava, crashing and cracking solid rock and atmospheric elements such as smoke and dust. As Kronos lays waste to the battlefield, two plumes of dense smoke trail behind him. One is connected to Kronos’ body with another following him. These were placed and layered to emulate Kronos’ movement stirring up a thick, dense eruption of smoke both from the titan and through the volcanic rock. Finally, live action smoke was incorporated to give an even denser and more realistic feel to the sequence. Scanline’s Flowline was used to simulate the smoke simulations and in order to handle the huge amount of data per frame, a new set of volume tools was created. In addition to the smoke plumes, Kronos also oozes and sprays different forms of lava from his surface. MPC’s artists created molten to cool lava streams using Flowline fluid particle simulations and solid rock lava was made using MPC’s propriety rigid-body solver, PAPI. Kali, MPC's finite element based destruction tool, allows our artists to shatter and destroy objects at render time, this was used to handle the cracking and the breaking of rocks, trailing particles and to create fluid dust simulations and particles. The compositing team enhanced the sequences by adding further layers of dust elements on top of those.

Early in pre production it was apparent that the Chimera creature would be too large and agile for a man in a suit to enact; so the decision was taken to develop it in CG, requiring a number of shots to be pre-vised giving the crew a geographical layout for the sequence. This informed the production designer’s decision to create arenas where battles could take place with the actors, stuntmen and props going head to head in precisely mapped out spaces. The Chimera itself was largely designed in pre production with concepts then passed to MPC who recreated the designs as a CG model. The specific challenge for MPC’s rigging and animation teams was how to make a beast with two heads move in a realistic fashion. MPC VFX Supervisor Gary Brozenich explains “The trickiest issues involved where to place the split in the neck, how far back on his spine would feel natural and how to proportion the rest of the anatomy to compensate for this. We also had to gracefully handle the interpenetration issues arising from two heavily mobile portions occupying the same anatomical space. Thankfully, both issues were dealt with very effectively and very early on with range of motion studies.” MPC’s animation team looked carefully at the animation of the Chimera, referencing material of lions hunting and attacking. The Chimera’s breath vapour and fire so the FX team used a mixture of elements created using Maya and Flowline combined with actual flame thrower material shot on set.

The Makhai are two-headed, double-torso'd, sword-wielding killing machines. MPC’s concept art department designed these vicious demons, working with an initial brief from Overall VFX Supervisor Nick Davis. The creatures were to emerge from volcanic rock surrounding Kronos, but it was important that they were not too strong or large to fight humans on the battlefield. Director Jonathan Liebesman vision of the Makhai involved multiple arms and two distinct torsos and heads; MPC needed to understand how a character like this could fight, but more specifically how it would emerge, run and navigate through complex terrain while swinging swords. To visualise this, MPC’s concept, rigging and modeling teams collaborated to create motion studies which informed the final design. Having two body elements meant that the rigging team had to be cognizant of not only the anatomical structure but also the affect this split would have on this structure. Many iterations and clever solutions were undertaken to create the Makhai as seen on screen and make its movement feel as fluid as possible.

The final battle required the creation of a huge 3D environment, which was a combination of plates from two primary locations; one in Tiede National Park in Tenerife and a very different battlefield location in south Wales. The initial eruption and Kronos’ path of destruction necessitated several weeks of specific aerial photography over various volcanoes and lava created terrain in Tenerife. The plan was to shoot all of it so the Editor, Director, Supervisor and all of the artists had an inherently realistic core to spring from that could be re-projected and altered significantly in post as required.

The Gods Death sequence sees the Titans turn into sand. Shots were match-moved and actors were roto-animated to their performances. The actual destructive process was created using Kali. Once the ‘Kali effect’, which gave us the gross collapsing effect, was approved it drove a more granular particle simulation giving the sand like appearance. Likewise, the initial model to undergo the Kali effect was used to spawn a surface of particles that inherited their colour from the textured and dmp-projected geometry. This served as the rendered hard surface for the actor. This was then introduced in a ‘patchwork’ across each performers face and clothing by the Compositing team using Nuke. In some cases, whole sections had to be re-tracked and warped to contend with the changing topology of their faces as they delivered lines. 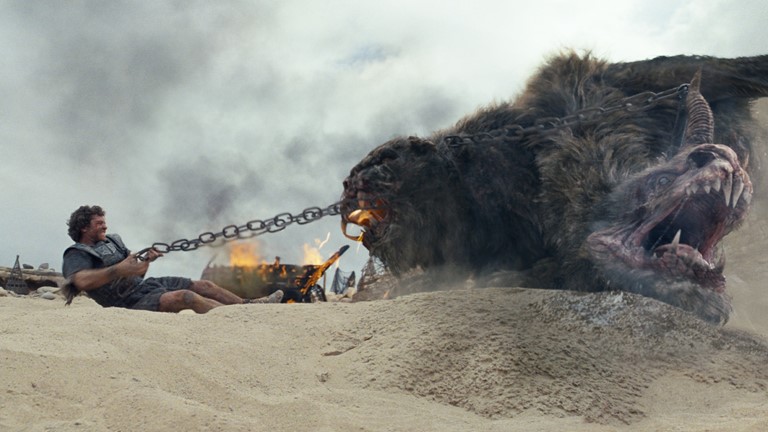 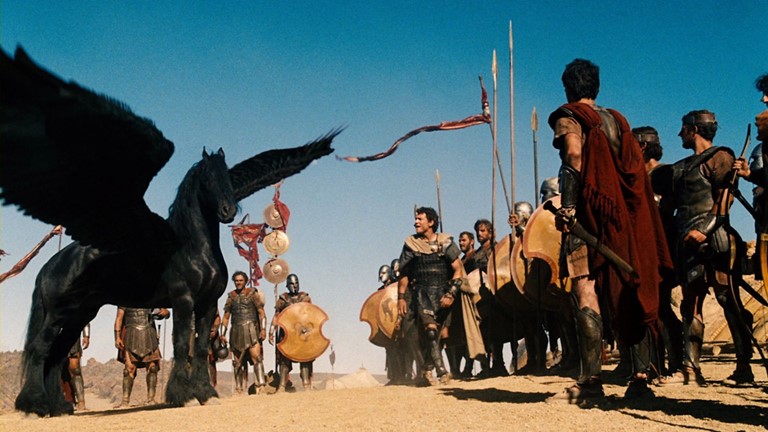 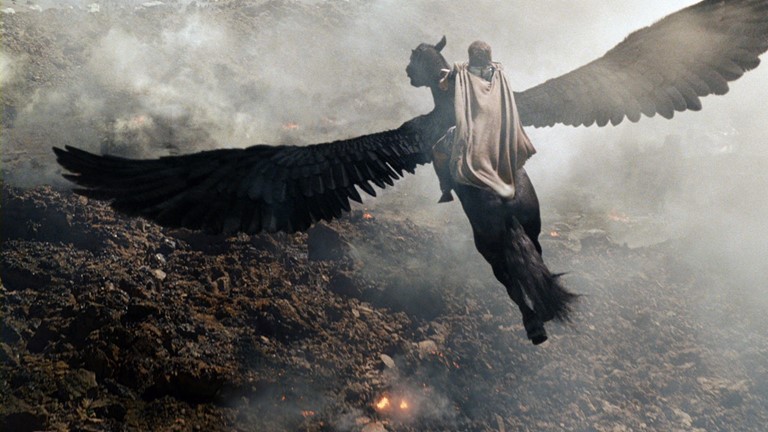