"From my point of view as a Director, MPC were the perfect company. They said what they could do, then they did it. End of story, but a very happy one! I would use them again in an instant.”
Richard Loncraine, Director, ‘Wimbledon’

Working Title Films’ ‘Wimbledon’ is a sweet and funny tale of romance across the net and is directed by Richard Loncraine. As sole visual effects facility on the project, MPC completed 230 visual effects shots with a high level of involvement throughout the entire production. The feature was digitally graded in the MPC Digital Lab under the guidance of Martin Kenzie. Australian Wimbledon champion Pat Cash served as tennis advisor on the film which was granted unprecedented access to 2004’s Championships by The All England Lawn Tennis & Croquet Club (AELTCC).

From the outset, Richard Loncraine requested ‘graphic and dynamic action’ – avoiding the traditional style and camera angles of television sports coverage. In April, 2003, a previs team of 3 MPC artists including Visual Effects Supervisor Richard Stammers started work from a satellite production office at Shepperton studios. Their initial task was to create pre-visualisation of the more complicated “effect-based” tennis action shots. From this, the huge challenge facing the crew became apparent: how could they create the illusion that the audience IS situated in the tennis ball, travelling at 100mph over the net? The solution was to be a combination of multiple repeat passes using a motion control camera rig, blue-screen elements and CG tennis balls.

During pre-production, the MPC team developed ongoing concept tests to aid the transformation of Richard Loncraine’s ideas for complex shots from storyboard to reality. One example involved a “frozen moment effect” when Peter Colt (Paul Bettany), serves for a crucial point and, blocks out the brouhaha from the crowd in order to concentrate. To achieve this, MPC set about finding creative and financially viable ways to portray this. The method seen in the movie was created by MPC’s VFX Supervisor, Richard Stammers, who, to create a 360 degree shot, attached a camera to a supertechnocrane and swung this around at 30mph creating an arc.

Once the camera work was completed the shots were stabilised digitally before a varying degrees of digital manipulation created the final sequences. Another solution was needed when MPC discovered that Centre Court is highly affected by the movement of sun and that the shadows cast by the roof would affect the shots. Luckily, the pre-vis was again able to offer practical solutions to production via a CG model of Centre Court onto which real shadow and sunlight moves were mapped.

MPC met with Pat Cash several times during pre-production to understand how to ensure the tennis looked as authentic as possible. Although, Pat had coached the actors to a high enough standard to look professional close up, the balls needed to land in specific, pre ordained places – and sustaining such a rally at a professional player level takes years of training and practise. MPC stepped in and a photo-real CG ball, complete with fur and flying fuzz was created and added to many wide shots of sustained rallies - as well as the occasional close-up. As reference, hours of live matches and video footage were viewed.

For two key scenes, MPC created fully digital environments which supplement live action photography. Firstly, for the opening scene in Monte Carlo, live action plates were shot on a tennis court on a back lot at Shepperton Studios which ultimately becomes a photo-real version of the Monte Carlo tennis club.

For a transitional device at the end of the film the camera travels in one fluid camera move from inside Centre Court, through clouds over London and the UK, miles through space high above the Earth to see a tennis racket hit the Earth back towards camera. As we travel back in over America and swoop through the skyscrapers of Manhattan we find our heroes playing tennis in a Manhattan environment. 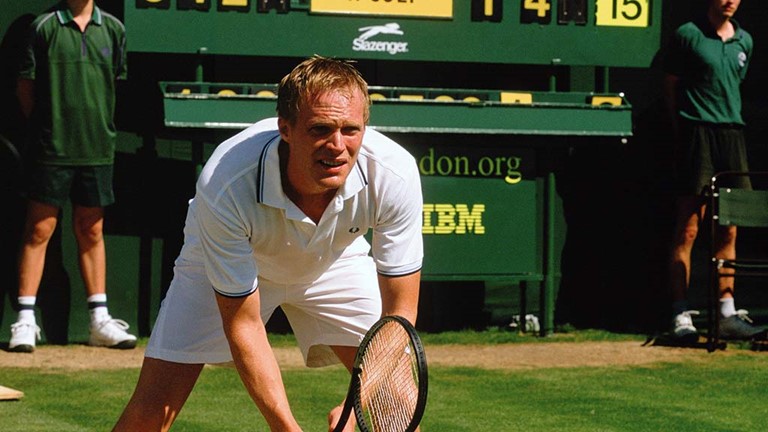