The first large sequence, tackled by MPC’s Vancouver studio, takes place after the Rangers are ambushed at the start of the movie and John Reid awakens high up on a Spirit Platform. The team were tasked with extending the height of the canyon and narrowing the width to give a more dramatic feel. The sequence completes with Lone Ranger standing high up on the edge of a solitary platform surrounded by CG flies, facing a CG reinterpretation of the valley from Dead Horse Point Utah. The camera then pulls back on a full CG landscape, peppered with Anasazi Ruins sourced on location in the American Southwest.

The most comprehensive work completed in Vancouver was a sequence where Rebecca Reid climbs out of a train and crosses a trestle bridge at night. For this the modelling team built a CG train and integrated studio shot material with full CG exterior environments. The challenge was to combine the plate footage and CG train with fast moving digital landscapes, keeping them photo real.

MPC’s London artists focused on a few of the larger CG contributions. The team creating a group of CG scorpions that emerge from the ground and crawl onto the faces of Tonto and Lone Ranger before being licked by a CG muzzled Silver. The scorpions are full CG throughout the shots built and animated by the team, and any time Silver laps at them his head and mouth are CG. The creatures were created through high-end Shader work and development, and used MPC’s proprietary hair and fur simulation software.

The team also completed highly complex horse and rider simulations for a scene where stampeding Comanche's are mowed down by Gatling guns. Using high numbers of real horses and riders for battle sequences such as this are now restricted, due to the possibility of injury in the process, which is where MPC came in. For the shoot, a team of highly trained Native American stunt riders did amazing work charging down a ski slope bareback. The team then took those plates and rearranged their use with the editors. Through a great combination of motion capture animation clips and rigid body simulations, driven through our Alice crowd engine, they were able to create the drama that was required for the scene without putting anyone in harms way. Animated CG horses jumping over the camera and falling full screen were added to bring energy to the shots. Finally the FX team shattered the surrounding trees with ricocheting bullets.

In addition to these animation driven shots MPC also created a short sequence of full CG cave interiors, which are blown apart and collapse as Tonto and The Lone Ranger leap from a high ledge. This original concept sketch by the Production designer was realized in the CG extended environment, using photos of Carlsbad Caverns sourced as texture and shape references. The small number of shots employed a great deal of dedicated compositing of CG and live action elements of fire and water effects to complete the dramatic appearance.

“Gore comes with a very strong reputation as an uncompromisingly creative director with great visual scope and boundless energy. He was also a fantastic collaborator and brought vision and his enthusiasm to the whole team at MPC. The Lone Ranger needed to bring the epic scope of the classic cowboy film but made with the tools and perspective of a modern filmmaker. It allowed us to go bigger and bring greater spectacle than its predecessors. At the core of it is a phrase that GV used continuously which was to keep everything ‘honest’. He wanted the possibilities VFX brings and to push the visual as far as they could be, but without tipping into anything fantastical that may take you out of what is a very rooted and aesthetically earthy film.” 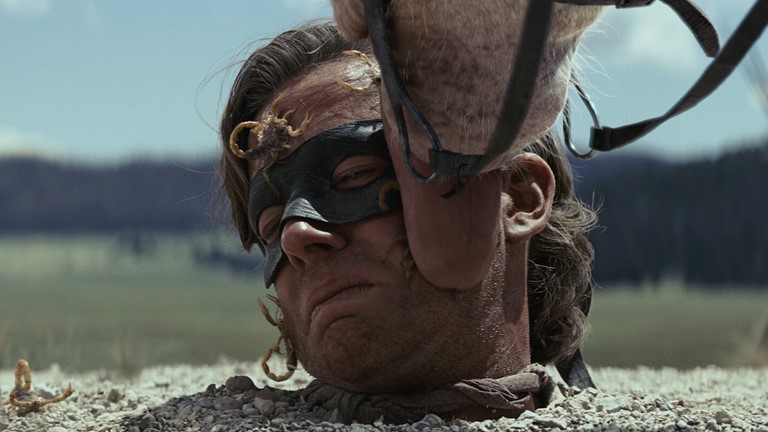