Sherlock Holmes: A Game of Shadows

Sherlock Holmes has always been the smartest man in the room… until now. There is a new criminal mastermind at large – Professor James Moriarty (Jared Harris) - and not only is he Holmes’ intellectual equal, but his capacity for evil, coupled with a complete lack of conscience, may give him an advantage over the renowned detective.

The first task was to recreate period Baker Street in the daytime. The main shot was an establishing shot, starting with a view over the rooftops of London and craning down to street level in front of Holmes’ apartment at 221 Baker St. This was accomplished by augmenting the practical crane plate, which looked over a grassy field shot at Leavesden Studios, and then craning down to a partial set piece of house fronts. The team combined motion control crowd elements, with CG buildings and DMP set extensions, along with CG crowd and smoke FX. The shot was crucial for setting the tone and feel of period London, as it was the first wide establishing shot of the movie and began the opening credits. MPC’s compositing team also completed a few composites of Holmes inside his study, blending him in with his surroundings to initially appear invisible.

A period Parisian square, Place de l’Opera, was recreated alive with people, horses and carts as well as interior and exterior shots of the famous Opera House. The sequence plot is that Holmes thinks there is a bomb buried beneath the stage at a performance at the Opera House, though he figures out too late that it is a bomb planted in the Hotel across the square. To build an accurate 3D replica of the square and Opera house, MPC’s visual effects photographer traveled to the square in Paris to collect reference photography for the modeling and matte painting teams.

The exterior shots were mainly night shots and the team worked with plates filmed against green screens from locations in Waddesden and Greenwich. The plates were augmented with CG and DMP buildings on all four sides, and CG crowds and FX work were added to bring period atmosphere to the scene. It was important to convey a sense of liveliness in the square, and MPC’s lighting team lit it to feel as if it was bright but consistent with the types of lighting of the period. Other shots involved lighting and compositing of CG buildings and practical fire FX enhanced by CG smoke and debris to amplify the bombing of the 2nd floor of the grand hotel Hotel du Triomphe

In addition MPC also created an audience within the Opera House. Our photographer captured high resolution stills to rebuild the auditorium as a panoramic stitch, and then, in compositing, populated the audience with practical audience elements that were shot after the hero plates.

The final sequence MPC worked on for A Game of Shadows, involves Holmes and Watson approaching and entering a war time factory complex, based on a real historical war factory, where Holmes eventually encounters Professor Moriarty.

Once inside the factory, Holmes travels through a maze of buildings looking for a specific watchtower. Here, the majority of the work focused on creating the maze from a combination of partial practical plates and greenscreen elements in which the team were able to build and add CG and DMP buildings to the scene. A library of around 20 CG buildings - based on actual factories from Germany, France, and England -and a suite of ground props like barrels, ladders, and carts helped enhance the overall scene. The team could also move around these assets and dress for each location and camera view, while at the same time use in wider establishing shots to give a sense of scope and expanse to the factory.

There were also a number of big FX shots within the factory, mainly involving Watson firing a CG Big Bertha gun - based closely on the actual design of the Big Bertha - into the CG watchtower. To achieve this, the team built a full CG version of the watchtower and then destroyed using MPC's in-house FX tool call Kali, which uses a finite-element-analysis engine at its core to realistically simulate structures and objects being broken into many smaller pieces. The FX team also created huge clouds of swirling dust and debris using Flowline.

The exterior railyard that Holmes, Watson and Sim escape into was accomplished by starting with greenscreen location photography filmed at a modern railyard museum, and then building a factory layout using the already created CG buildings. These were then mixed with digital matte paintings for the distant environments. To achieve the desired smoky and grey setting needed, the team replaced most of the practical skies with a cloudy, overcast panorama, and composited in practical special effects smoke elements, to create the appearance of active smokestacks.

For the sequence involving Holmes escaping through the woods, a special high speed Phantom camera was used to give the signature Sherlock Holmes real-time / slow-motion effect. Original plates of the actors running through the forest, with some practical special effects explosions going off around them were then composited in with additional Phantom plates of tree, mortar and dirt explosions. These were used to enhance the threat and danger, and to fill the frame near and far with trees exploding from bullet hits and big bertha shells. For added effect, the team built a CG version of one of the forest trees, and exploded it using Kali, MPC’s proprietary destruction tool, to show the effect of a Big Bertha shell travelling in extreme slow-motion through a tree. A number of shots were filmed with a long lens and wide lens at the same time. The film editor then cut these together to create the effect of punching in and out in slow motion to which the team added explosions, debris and focus pulls.

Sherlock Holmes: A Game of Shadows is released theatrically on 16th December 2011 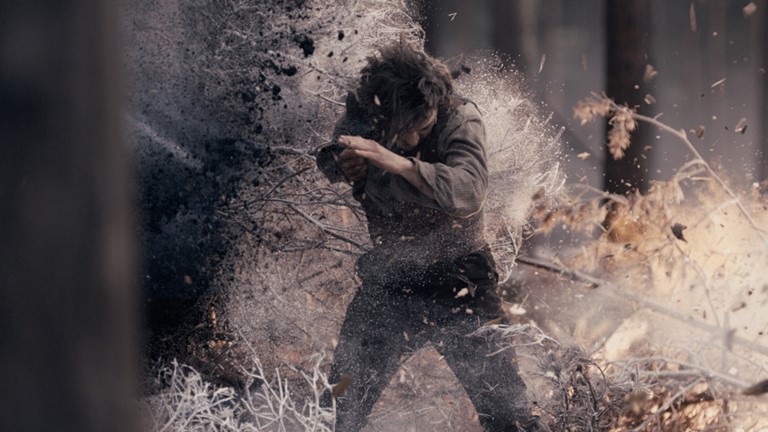 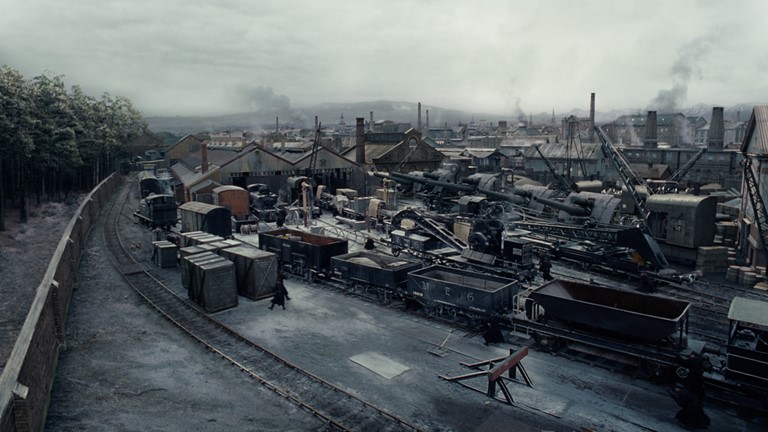 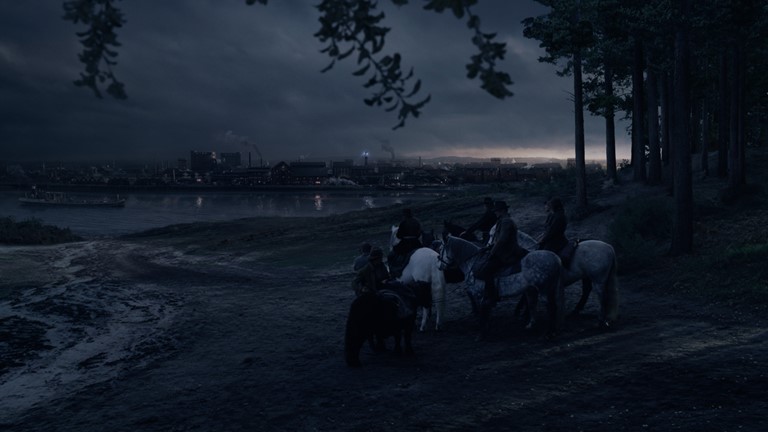 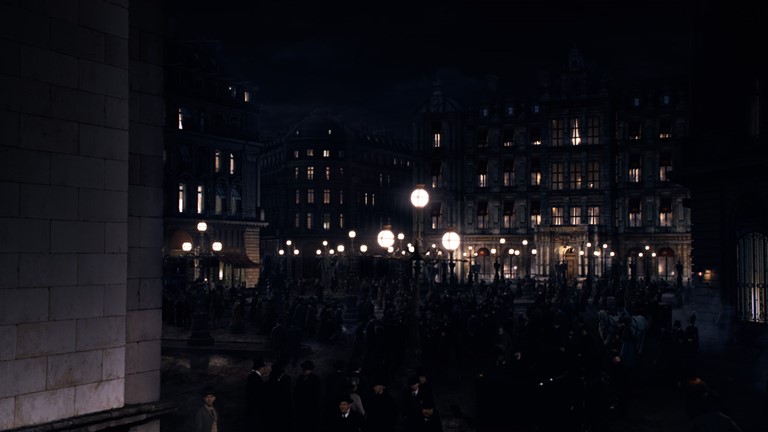 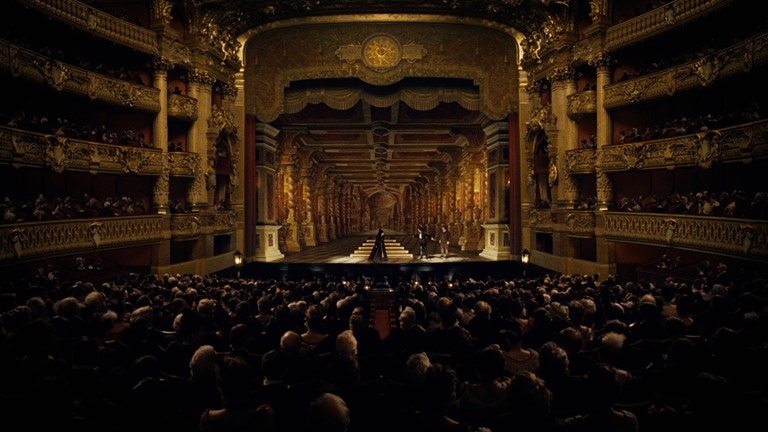 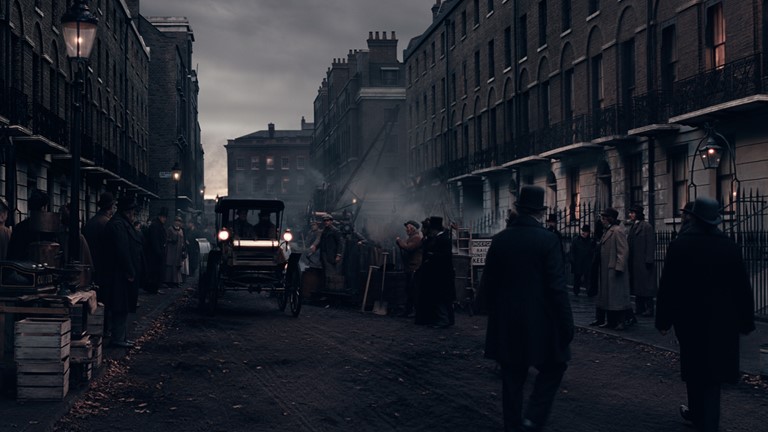