‘The wizards at MPC have done it again! Their creation of the destruction in the rolling lobby and ballroom, together with the incredible combination of oil, water, fire and smoke and awesome set extensions are absolutely unparalleled. I love working with a company that is so comfortable pushing the technological envelope to the edge (and occasionally beyond !)’

Wolfgang Petersen (Troy, the Perfect Storm, Das Boot) directed ‘Poseidon,’ a remake of the 1972 disaster movie ‘The Poseidon Adventure.’ The movie is produced and distributed by Warner Bros. Pictures. MPC’s effort was focused in two main areas. Firstly; full CG environments and partial set extensions to the inside of the ship, and secondly, the development in association with Scanline AG in Munich, of a photo-real fluid dynamics system to create realistic water and fire.

‘Its New Years Eve and festivities have begun aboard the cruise ship Poseidon, at sea in the North Atlantic. One of the finest vessels of its kind, Poseidon stands more than 20 stories tall, boasts more than 800 staterooms and 13 passenger decks. The guests have gathered to see in the New Year in style, however, on the bridge; the first officer senses something is wrong’

Set extensions and CG environments.
MPC’s team lead by Chas Jarrett used two approaches to bring to life the interior of the SS Poseidon; firstly, extensions to three partial sets of the inside of the ship built for the shoot in Burbank, LA and secondly, the creation of full CG environments including CG water, fire, props and characters which could all interact in a completely believable way.

Once the extensions or environments were built, the team needed to populate them with people and props to re-create the expectant atmosphere of New Year’s Eve and the subsequent chaos of the sinking ship. Hundreds of models of people, chairs, confetti, balloons and poker chips were all added to MPC’s rigid body dynamics system PAPI and were rendered using Mental Ray, a first for a feature film at MPC.

PAPI simulates ‘hard’ objects in cg and for Poseidon it also allowed for large numbers of close up CG characters to interact naturally with one another and their surroundings. Much effort was made to move away from the usual ‘rag doll’ style digital stunt characters making them smoother and more realistic by incorporating motion-capture into the character simulations, along with multi layered cloth simulated with SyFlex.

Flowline; Fire & Water Simulation.
A large portion of MPC’s work for Poseidon involved the simulation of water and fire. Realistic CG water and fire have long been a difficult challenge, to achieve this MPC exclusively licensed the fluid simulation software ‘Flowline’ from Munich based Scanline AG. The system was integrated into MPC’s Linux/Maya pipeline and was further developed with Maya and Mental Ray to achieve groundbreaking work in this field.

As a simulation tool, Flowline is specifically designed with VFX in mind and re-creates the physical properties of water, fire and smoke using tools and paradigms familiar to VFX artists. The main sequence to utilise the software is the ‘inverted lobby sequence’ where the ship has capsized and the passengers are fleeing over a makeshift bridge. The water below bubbles, splashes and finds it level before an air conditioning chiller crashes through the ship releasing oil which drips into the water pool below before igniting into a flaming column of fire. To achieve this, MPC’s FX TDs used Flowline to simulate how the water, oil and fire would interact with one another. Scanline’s Stephan Trojanksy, Flowline’s architect and Danielle Plantec were seconded to the MPC team to supervise the Flowline team in creating these CG fluid effects.

Another key scene using the Flowline software takes place in the ballroom where water crashes through the windows, the team seamlessly intercut live action and CG water. Other work includes the creation of underwater effects including bubbles and the refracted flames. The licensing of Flowline and integration with the CG pipeline gives MPC the ability to deliver a wide range of complex effects involving fire/smoke/water/oil. 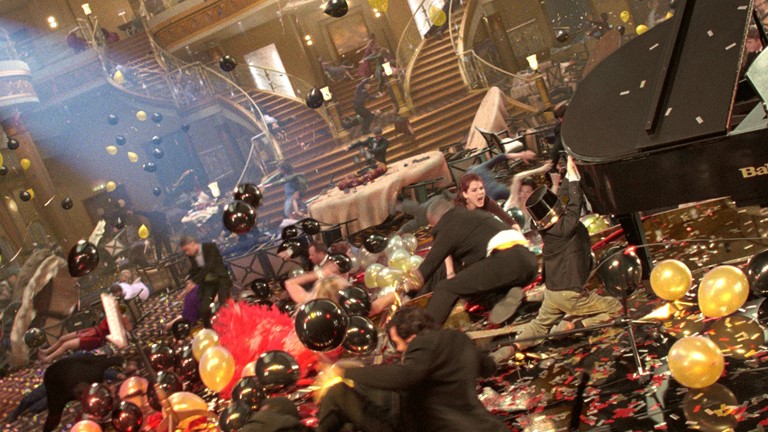 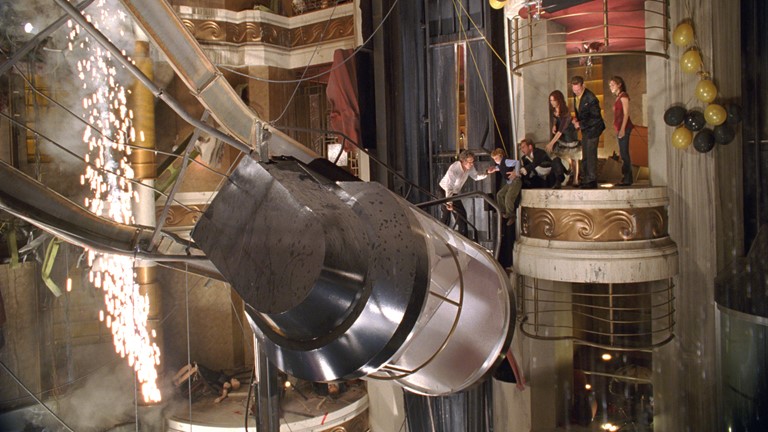