MPC bring the magic to Pan

The largest scope of the team’s work was creating the Neverbirds and building the Neverwood environment. The original concept art for the Neverwoods was created by the Pan production art department and pictured an immense, colourful jungle. The trees were as tall as 70 storey high buildings with roots so big that people could walk underneath them. A partial section of the jungle was built for principal photography in Cardington, UK, measuring 90 meters long by 60 meters wide. The onset trees, however only reached 10 meters tall, so MPC’s work involved extending the trees in height, and extending the jungle environment.

MPC’s Environment department handled the 3D models and textures for the Neverwoods. The team started by re-topologizing the real trees based on a lidar scan provided by production. They then built tree trunk sections that could be connected to each other, allowing them to easily change the height of the trees on a shot by shot basis. The tree’s texturing was completed in Mari using reference photography of the set tree trunks, and Speedtree was used to create a library of branches, vines, canopies and plants.

Once all of the assets were ready, the next task was laying out the CG jungle. MPC’s layout team, who were responsible for making every shot look rich and beautiful through the camera lens, handled this task. Lighting and Compositing were then responsible for setting the mood and giving a sense of depth and realism to each shot.

The Neverbird was MPC’s ‘hero’ character in Pan. In the story, the Neverbird is a 12 feet tall creature that lives in the jungle. They are mainly made out of exposed bone and ligament and their feet look like those of a chicken. The CG model was based on a maquette built by the production art department. The creatures were described as being inquisitive and clumsy and it was the job of MPC’s animation team to bring those characteristics across in the bird’s movement. In the dramatic Neverbird Chase sequence, the birds chase Peter, Hook and Smee through the Neverwoods at night, requiring some complex roto and animation work.

An important element of the Neverbird Chase sequence was creating the ‘Nevermist’, which engulfs our heroes as they are chased by the birds. Unlike real mist, this magical mist is bright and colourful, with ribbons of light that illuminate the environment around it. It took MPC’s artists several months going from concepts to final composites in order to lock the final look of the mist.

MPC also created a digital version of the Native's Village for several wide shots during the Pirates Attack sequence. The most difficult one to achieve was the opening shot. MPC was asked to digitally extend the environment by having the camera come pull away from the tent and crane up to more than 60 meters above the ground while tilting down to reveal the size of the battle. MPC’s VFX Supervisor decided to replace everything that was outside the tent in CG in order to have complete freedom. This included the Pirates and Native's fighting, tents, the jungle, two Galleons (with pirates rappelling down) and colourful dust explosions.

Additional work by the teams included enhancing the detail of a CG model of Peter Pan for some close up flying shots; MPC’s modelling, texturing, groom, techanim and lighting departments worked on improving the detail to his anatomy, hair, textures and shading as well as running wind simulations across his hair and clothing, and the Pirates Attack sequence; where the FX team were charged with creating the Native's exploding effect. During the Pirates Attack sequence several Native's die, and as they do, they explode into colourful puffs of smoke. The effect was achieved with a combination of Flowline and Maya particles. The team used references video and photography from the Holi festival in India. 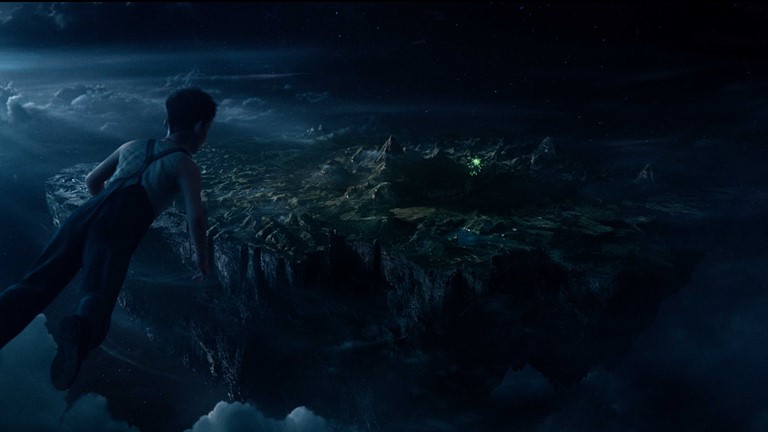