Night at the Museum: Secret of the Tomb

MPC bring the Museum to life for Night at the Museum: Secret of the Tomb

Get ready for the wildest and most adventure-filled Night At the Museum ever as Larry (Ben Stiller) spans the globe, uniting favorite and new characters while embarking on an epic quest to save the magic before it is gone forever.

The production shoot took place on stages at Mammoth Studios, Burnaby, BC, as well as at locations in London including the Great Court at The British Museum. The stages served to recreate a number of other rooms at the British Museum, as well as all of the interiors for the Natural History Museum in New York.

For the sequences set in The British Museum, MPC created a new set of digital characters to populate the Great Court. The team built CG Kakiemon Elephants, Balinese Dancers, an Egyptian Cat, Centaurs, a replica of the Colossal Lion statue that is in the Great Court, Ganymede the Eagle, painted stone Hippos, a flock of Bronze Herons, a pair of Lamassu, a Mayan Frog, painted metallic Peacocks, Shiva, a flock of Steel Doves, a pair of marble Dogs, jade Terrapins, and a terracotta figure of Winged Victory. Some of these were close replicas of pieces from the British Museum and some were interpreted works. Throughout the process it was necessary to change the scale and texture of the carvings, curves and shapes to give the objects scale. MPC’s lighting team lit characters in the room, initially by replicating the lighting that was there but also gave the room some ambient lighting as the sequences take place during the daytime.

MPC also created a new Triceratops skeleton character. The dinosaur was designed using photo references of Tyrannosaurs skeletons, and particular attention was paid to ensuring that the texture of the bones looked weathered and worn. The Triceratops was given similar characteristics to the TRex in the first 2 movies, in that it behaves like a big dog. MPC’s animation had fun with a few moments in the Hall of the Hunt where the Triceratops acts like a happy puppy until things go wrong, and it goes on the rampage.

On the wall of the Hall of the Hunt, 4 stuffed animal heads come to life. To create these characters, MPC’s shoot team visited a taxidermy shop and took high-resolution photo reference of animals, which were then used to create a CG warthog, moose, antelope and a gnu. The Triceratops chases the cast into the Hall of History and Middle Ages, an 8-sided room with a huge map of the world on the floor.  For this sequence, MPC’s environment team extended the set from the second floor up to the peak of the dome.  The Triceratops battles with Larry, and we meet Sir Lancelot. An epic battle ensues, between Lancelot and the dinosaur. MPC created a digi-double Sir Lancelot, so that a slow motion shot where he runs up the wall and flips over the Triceratops could be achieved.

MPC were also tasked with recreating the New York Planetarium, involving extending the set from the 2nd floor upwards, the city beyond the glass and the iconic Hayden Sphere. In this sequence, Teddy Roosevelt, played by Robin Williams, introduces us to 5 constellations, Orion, Leo Major, Leo Minor, Scorpio, and Cancer. These constellations were FX heavy characters, made up of stars and constellation-like textures, both on their surface and internally.

MPC also created a photo real digi double of Dexter the Monkey (played by Crystal the Monkey). In the movie, Dexter rides a CG Tiger and performs an aerial silk dance routine. It was crucial that the digital version of Dexter was as close as possible to the real monkey, since shots would be intercutting between the two. High res reference photos and footage of motion studies of Crystal were taken and MPC’s look dev team worked for months on building a photo real CG double. MP’s animation artists brought the digi double to life for the routine, which required the right balance between animalistic traits and bringing human performance elements to the dance.  The lighting team added strong CG lighting to mimic spot lit performance lighting.

The final sequence MPC worked on was the final Dance Party. For this sequence MPC worked on CG antelopes, a mammoth, a moose, an Oryx, an ostrich, a rhino, a saber tooth tiger, a regular tiger, a Tyrannosaurus Rex, zebras, and a wisecracking Easter Island Head. The shots also included set extensions for the second floor and roof of the History Hallway of the Natural History Museum in NY. The 5 constellations transform into disco balls, and shoot out rays and light in all directions. There was a lot of fine detail to ensure the lighting of the CG characters and environments lined up with the practical interactive lighting. 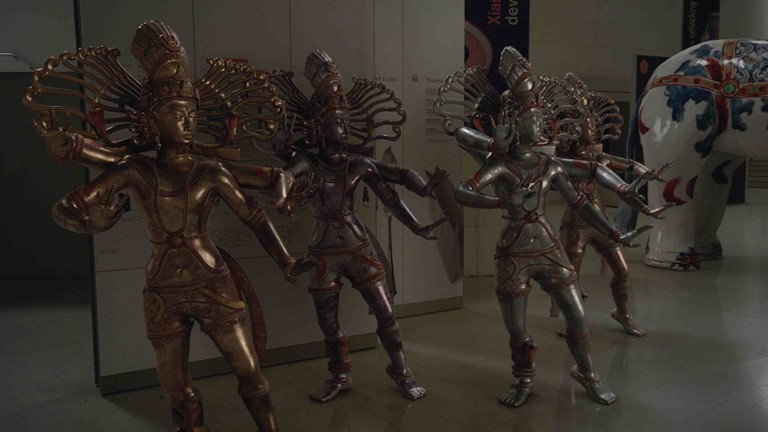