At the start of the movie we meet the young Maleficent. She flies into MPC’s full CG Fairy World environment with colourful trees, lakes and waterfalls, interacting with MPC’s hero fairies as she travels. MPC’s environment team built a library of photographic elements taken from a second-unit shoot for their human and fairy environments. These included trees, rocks and bushes. This CG environment was built in Maya, using IDV Speedtree as a basis for tree geometry. The team created 15 different types of creatures, all with their own unique characteristics and features. These ranged from the larger, humanistic mushroom fairies and ‘Wallerbogs’, to the more animalistic ‘Cheeps’, smaller delicate dew fairies and water pixies.

MPC were tasked with creating Maleficent’s iconic castle, which was created as a 3D model. A great deal of attention was paid to the texturing of the walls. The texture team layered different brick, mortar and masonry effects to the model to enhance detail and give a realistic look. The lighting team took inspiration from moonlit walks around Vancouver, taking photographs of different buildings hit by moonlight and its effect. They used a combination of subtle light sources on the model, including strong internal lights and firelights to make the castle feel as grand as possible and the compositing team added flags and soldiers to the battlements.

One of the most iconic scenes of the movie includes an establishing shot of MPC’s CG castle with a CG crowd arriving for Aurora’s christening.  MPC’s FX team created the green magic Maleficent uses to curse the baby.

MPC also created the raven Diaval, that Maleficent transforms into a man. MPC’s animation team researched the traits of the bird’s behaviour, from their flight to feather and wing movements, spending time with a bird-handler to gather photo and video reference to create a CG model. To transform the bird into a human the FX team used fluid simulation ink effects and deep compositing.

MPC built a CG thorn wall, which surrounds the fairy world, and used its destruction tool Kali for the disruption of the soil. Soldiers attempt to destroy the wall and the team added CG fire balls, trebuchets, soldiers, fire and flame FX and destruction elements.

MPC created a full CG dragon and Great Hall interior for the climatic battle sequence.  MPC worked with designs created by production concept artists and continued to develop the fire breathing creature using ZBrush. The team has the additional complex task of transforming the creature into the raven. Digital burning embers, dragon fire and smoke FX fill the room and MPC also transformed the character of Diaval from raven to dragon.  Full CG soldiers were created to battle the charging dragon. 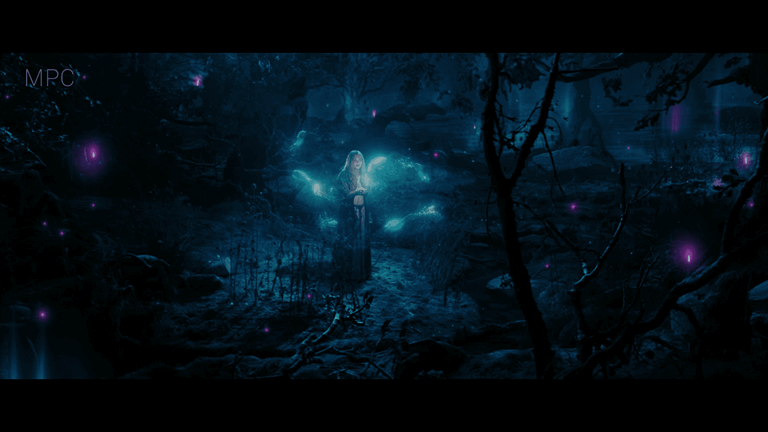