Intrepid young explorer Sean Anderson (Josh Hutcherson) traces a mysterious distress signal to a remote island that's not on any map, and embarks on a daring rescue mission to find his missing grandfather (Michael Caine). Directed by Brad Peyton, ‘Journey 2’ is the follow-up to 2008's successful ‘Journey to the Center of the Earth.’

On an island full of strange and oversized creatures, the primary challenge for the team was to create a giant, photo-real lizard that aggressively chases the protagonists as they stumble upon its nest.

The director’s brief was to create a thrilling jungle chase sequence and MPC were tasked with creating a photo-real lizard that stood 12 feet tall and 30 feet long and displayed a large cape-like frill and sharp dino-like teeth.

With this in mind, the team set about pre-vising the sequence. Knowing that the creature design needed to focus on striking a balance between enlarging a pre-existing ‘real’ lizard, and adapting it by enlarging its main features and textures. The team experimented with the effects on body and head postures, natural gait and the movement of a creature more than 10 times its normal size.

To help with the development and character study work, the team brought in Dr. Stuart Sumida - an expert in animal anatomy and movement – who helped determine the basic patterns and behaviours that the team should aim to recreate. The team focused on frilled lizards and iguanas as the real-world counterparts that the team’s giant lizard would be based on. Walk cycles were later designed and then enlarged to gauge their success.

With the animation set, the environment team went about creating a dynamic foliage system that would allow the giant lizard to run through the jungle and look fully integrated into it. The team built several sizes of appropriate trees, bushes and ferns with which the lizard could push out of the way or destroy. By intelligently placing these throughout the plates, the team could place the lizard successfully into the shots seamlessly.

Finally, MPC’s FX team focussed on adding dust and debris to the lizards footprints as well as smoke which emits from the lizards nostrils after swallowing a CG flare.

Journey 2: The Mysterious Island is released theatrically from February 10th. 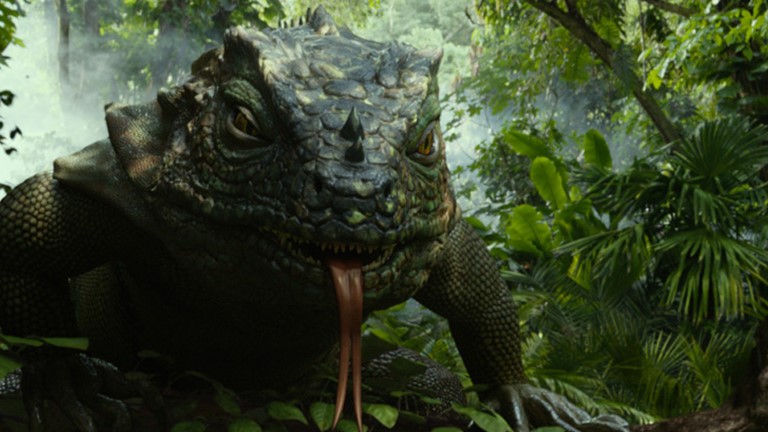