From Academy Award®-winning filmmaker Andrew Stanton, “John Carter” is a sweeping action adventure set on the mysterious and exotic planet of Barsoom (Mars).

Based on the classic sci-fi novel by Edgar Rice Burroughs, the film tells the story of John Carter (Taylor Kitsch), who is inexplicably transported to Mars where he becomes embroiled in a conflict of epic proportions amongst the inhabitants of the planet, including Tars Tarkas (Willem Dafoe) and the captivating Princess Dejah Thoris (Lynn Collins). In a world on the brink of collapse, Carter discovers that the survival of Barsoom and its people rests in his hands.

The Warhoons themselves were originally modeled at Double Negative who passed the assets onto the team at MPC who then modified the skin and clothing textures with additional weathering and distress as well as boosting displacement maps to create more texture, crust and wrinkles on the skin.

Next the rigging team created puppet controls for the Warhoons as well as dynamics for muscle, leather straps and cloth for the army’s elaborate costumes. The animation team then set to work bringing the Warhoons to life. The majority of the scenes were built on keyframe work but the team also used motion capture as well as filming themselves performing Warhoon like movements.

Andrew Stanton had a strong vision of how the John Carter Vs Warhoons battle scene should be designed as well as the rhythm of the scene. The design, screen direction and flow of the scene was story boarded over the background plates and MPCs layout team began laying out the shots against the boards, adding creative ideas and working through issues that were met when the drawn boards wouldn’t work with the realities of the camera lens and stage space. Cycles were made for MPC’s proprietary crowd system Alice and many of the big fighting shots were fully delivered by animators.

Alice was used a great deal in MPC’s work, from shots of the Warhoons running across the desert, to the big fight scene and finally when the Xavarian airship barrages the Warhoons with cannon fire.  The Dynamics built into Alice were very useful for the fight scene as the director wanted to see lots of battle mayhem in the Warhoon crowds.  MPC’s crowd TDs added dynamics in-shot, on top of the blended animation cycles, to create a more integrated physical feel to the choreography.  The simulation tools have been designed to give the artists a great deal of creative control - which ends up being better than a simulation created by a games style engine.  The TDs can build up work, share choreography, or modify choreography based on specific direction, allowing for naturalism, choreography, and the ability for animators to add detail in the final step.

The film set for the Throne Room was a large space with an 80% green screen backdrop. The room was designed by Concept Artist Ryan Church and MPC created initial mood lighting and a full CG asset build. Modifications were then made by MPC’s team to help improve composition for the actual camera angles. Some small 2D manipulations of the foreground characters were made and then mental ray renders to produce bounce for the room, combined with renderman renders for texture and displacement. The compositors then created the final look with several weeks of re-balancing of shader outputs. 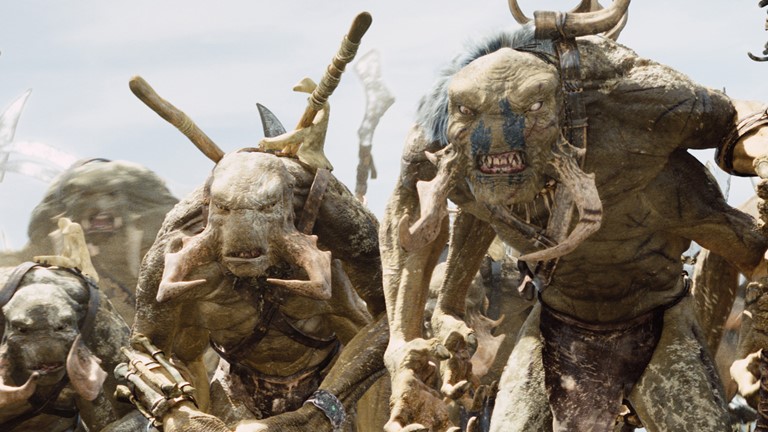