Harry Potter and the Chamber of Secrets

MPC created 15 minutes of screen-time digital visual effects and character animation for Warner Bros.' Harry Potter and the Chamber of Secrets, (totaling more visual effects shots than any other facility). As well as stunning effects for the movie, which was directed by Chris Columbus, MPC also created the title sequence for the film.

A team of approximately 60 artists worked on the feature over 12 months. MPC's Visual Effects Supervisor, Tom Wood and CG Supervisor, Chas Jarrett, worked on set with overall VFX Supervisors, Jimmy Mitchell and Nick Davies. An R & D period of several months was spent texturing and building computer models for the flying Ford Anglia and other characters. Both Jimmy and Nick were impressed by MPC, commenting, "it was a great experience working with MPC and we are looking forward to working with them again!"

Key visual effects sequences created in CG by MPC include the flying Ford Anglia, the Whomping Willow and a photo real CG snake for the dueling club sequence. CG environments were also created and matte paintings for the Burrows approach and for the opening shot in the film. Other effects include transition sequences – for example when Harry is "sucked" into the diary and transported back in time. The software utlitised for these effects was Maya, Renderman and Shake, as well as proprietary software developed by MPC's own R & D team.

The flying Ford Anglia
MPC's Simon Clutterbuck and Mike Cusack were the lead artists on the flying Ford Anglia effects. One of these sequences occurs when Harry and Ron embark on a rollercoaster ride above the Hogwarts Express, along the way passing Hogwarts School and ultimately crash landing into the Whomping Willow.

To achieve these sequences MPC built a computer generated Ford Anglia that intercut seamlessly with the real car, as well as creating realistic stunt doubles for Harry and Ron. The live action plates were shot from a helicopter and tracked in 3D. The viaduct and surrounding countryside were also modelled in order to provide surfaces to receive shadows from, and cast shadows onto, the car.

As the Anglia had the potential of passing extremely closely to the camera throughout the sequence, a high level of detail was required for the car including the interior, exterior as well as its occupants. This meant that the model of the car was comprised of hundreds of parts and therefore hundreds of textures.

To deal with the volume of textures, house shaders were written to allow for efficient handling. This, combined with MPC's own proprietary lighting tools and talented animators, culminated in a very successful effects sequence.

One of the main animation challenges for lead animators Jason McDonald and Julian Mann was to convey the feeling of huge weight and overbearing presence of the tree. Part of the solution to this was to make it seem as if the tree itself was exerting a substantial effort just to lift itself ready for each Whomp."

Similarly, the tree needed to feel convincingly wooden, so a balance had to be found between the subtle flexibility of some of the branches, while ensuring that they did not bend unrealistically. One further challenge was to make the tree appear to be performing its task with a single minded determination and so, when the flying car is clearly fleeing, the ancient tree resumes to its normal position.

The Whomping Willow animation was created using a combination of techniques - the main body and limbs were created using keyframe (mouse input). For the smaller, longer branches a procedural tool was used that had been developed by Julian Mann especially for the project. These longer branches would react to the momentum of the main limbs and could be fine-tuned by parameters such as stiffness, gravity and resilience. Without this tool the animation of these smaller branches would have taken too long in the given time.

The deformation of the main body of the tree was achieved by using a skeletal system that split the main trunk of the tree into three sections. This enabled the animator to twist the tree around itself in a similar way to thick rope - changing length, but never losing mass. The limbs of the tree were animated using forward kinematics (in essence, every joint on every frame was individually posed) - this allowed the most control over movement rather than relying on the software to fill between frames.

The Dueling Club cobra sequence
In this sequence Draco Malfoy casts a cobra from his wand at Harry. The brief was to add an entirely computer generated snake of realistic size, weight, texture, and behavior. Beyond it being produced from a wand it was to look and behave the way a real threatened cobra would.

All eleven plates were shot clean. MPC's Tony Thorne then story boarded the sequence to lock down the snake's broad action. The camera moves were then matched and roughed out so that the entire sequence was as an animatic. Tony and his team gathered as many references as they could of snakes to aid the animation - filming at zoos and pet shops and watching documentary footage. This gave them a good idea of a lot of the cobra's behavior, slithering and rearing up. It was then a process of animating the CG snake with all these nuances, paying particular attention to weight and drag and including subtle muscle deformation. The snake was then textured and rendered using both image based and normal computer lights in multiple passes before compositing.

Harry Potter and the Chamber of Secrets is on general release from 15th November 2002. 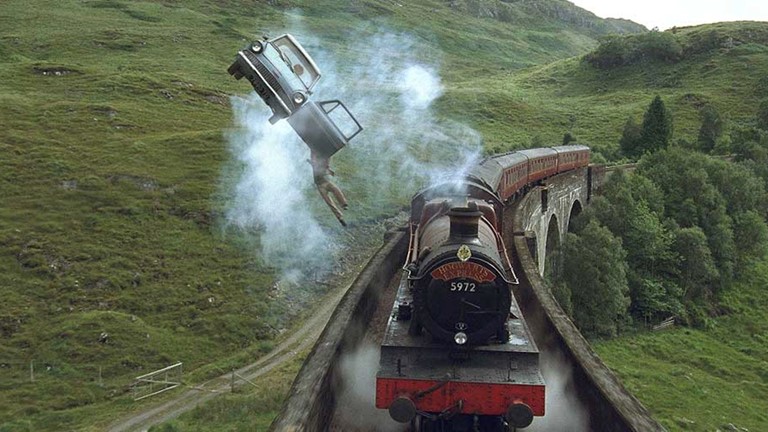