Guardians of the Galaxy

Key sequences included the development and animation of the extra-terrestrial, sentient tree-like creature Groot, voiced by Vin Diesel, a swarm of spaceships and set extension/environment work for the planet Morag, a synthetic Xandar city, the sky-based spaceship battle, the ‘Nebula Rebuild’ sequence, Groot’s illuminated Spores and the Cocoon sequences. Thrown into this mix was also a truly collaborative pipeline with more than 5 VFX companies integrating assets and workflows to achieve the breath-taking final result.

MPC artists started with Marvel concepts of Groot, and then worked on developing and refining him to meet Gunn’s vision of the character. Groot needed to have two defining personality traits; firstly that he is gentle and kind but also that he has the capacity to be fierce and aggressive. The challenge was to find both traits and combine them into his final look and animation. . Groot is a highly complicated character who required a high level of complex modelling. He needed to look as rigid as a tree but also flexible enough to animate and give emotion. Each individual branch running through Groot’s body was modelled and rigged individually. MPC’s animation team created a procedural system to automatically add these ‘mechanical’ effects based on the position of the joints.

Textures came from photos of a wide variety of trees at Kew Gardens in London. The texture of wood naturally looks like wrinkles on skin, so the challenge was to make sure that Groot’s textures looked like they were made of wood, but also to ensure that he didn’t look old. The team spent time looking at different trees and plants to find the right skin texture for Groot. He ultimately became a fusion of different species of tree. Groot’s wood and bark surfaces textures were enhanced with a variety of mosses and lichen to add detail.

Huge attention was also focused on his eyes. The correct look and expression makes the character believable, and considering Groot can only say a few words and is made of wood, this played a role.  MPC’s team looked at medical images of real eyes to understand eye anatomy and the visual result.  The geometry of this model was built in a new way, with the connection between the cornea and sclera adapted, and a type of eye tissue called limbus added to give a soft darkening around the edge of the iris. To emulate high-resolution macro photography of the human iris, precise displacement maps were painted to simulate the bumbines present in the reference pictures.

Groot and Rocket were conceived separately and assets were shared between MPC – who developed the Groot character - and Framestore who developed Rocket.   Some adaption of Rocket was required to fit him into the MPC pipeline. He was then integrated and animated into a number of MPC sequences; i.e., the ‘Cocoon’, the ‘Nebula Rebuild’ sequence, ‘Spores’ and ‘Net.’

The Spore sequence is one of most magical moments in the movie when we discover that Groot has the unique power to release glowing spores. In a highly CG environment, the team created the dandelion-like spores with moving tendrils. To do this, they used MPC’s crowd tool and added dynamism to every spore. They then applied a new functionality in Prman18, which converted every spore into a unique geometric area and cast light everywhere. The result is stunning.

To develop the rocky and desolate Planet Morag, MPC created 3D environments based on a small stage set. The

team augmented textures taken from the Grand Canyon making them more striking and dramatic so they appear desolate and otherworldly.

The story then moves to Xandar, home of the Nova Corps, where the Guardians are first brought together. Xandar was brought to life as a synthetic city by extending partial sets built on the mall stage set. To achieve this MPC referenced Marvel’s concept art of a top-down view of the city, which laid out the overall shape as the Nova Corps logo. The city was built at different altitudes from 30,000 feet high all the way down to ground level. The brief was for it to feel extra-terrestrial, and MPC took reference from interesting real-world architecture, including contemporary structures in Shanghai and Dubai re-shaping them into a style specific to Xandar. This necessitated the creation of a library of basic shapes and style designs for buildings and also included creating a sense of history in the city, with some areas having buildings that looked like they’d been there for 300 years, with others that were brand-new and futuristic.

The project required a number of different types of Spaceships; the Necrocraft, Star Blaster, Ravagers (including Rocket’s Warship) Dark Aster, Eclector and the Milano; each with different flight behaviours and structure. The biggest challenge throughout the aerial battle sequence was trying to marry the bold way the ships moved with real-life physics

MPC carried out animation studies to determine the different ships’ flight behaviour ahead of delivering the all-CG, 400-shot aerial battle. The Necrocraft swarm referenced the physics of buzzing flies moving in a very weird way, with a lot of rotation and change of direction. Unfortunately, this time real-life looked too random and orchestrated so the team spent time adding some more believable object-based physics back into the movement. For the Milano, James Gunn wanted to show off Quill’s superior piloting skills and that presented a similar problem - impossible things in CG tend to look CG. So; time was spent making events look real; adding weight and physicality to the Milano doing a 90-degree turn in mid-air. The other challenge was the sheer scope of the battle, a massive undertaking with hundreds of CG explosions and thousands of CG ships all behaving in a realistic fashion.

Marvel’s Guardians of the Galaxy was an exciting project, which utilized MPC’s full arsenal of top-end talent, in-house software, VFX tools and techniques.

About Marvel’s Guardians of the Galaxy:

From Marvel, the studio that brought you the global blockbuster franchises of Iron Man, Thor, Captain America and The Avengers, comes a new team—the Guardians of the Galaxy. An action-packed, epic space adventure, Marvel's “Guardians of the Galaxy” expands the Marvel Cinematic Universe into the cosmos, where brash adventurer Peter Quill finds himself the object of an unrelenting bounty hunt after stealing a mysterious orb coveted by Ronan, a powerful villain with ambitions that threaten the entire universe. To evade the ever-persistent Ronan, Quill is forced into an uneasy truce with a quartet of disparate misfits—Rocket, a gun-toting raccoon, Groot, a tree-like humanoid, the deadly and enigmatic Gamora and the revenge-driven Drax the Destroyer. But when Quill discovers the true power of the orb and the menace it poses to the cosmos, he must do his best to rally his ragtag rivals for a last, desperate stand—with the galaxy's fate in the balance.

James Gunn is the director of the film with Kevin Feige, p.g.a., producing. Louis D’Esposito, Alan Fine, Victoria Alonso, Jeremy Latcham, Nik Korda and Stan Lee serve as executive producers. Marvel’s “Guardians of the Galaxy” is written by James Gunn and Nicole Perlman and released in U.S. theaters on August 1, 2014. 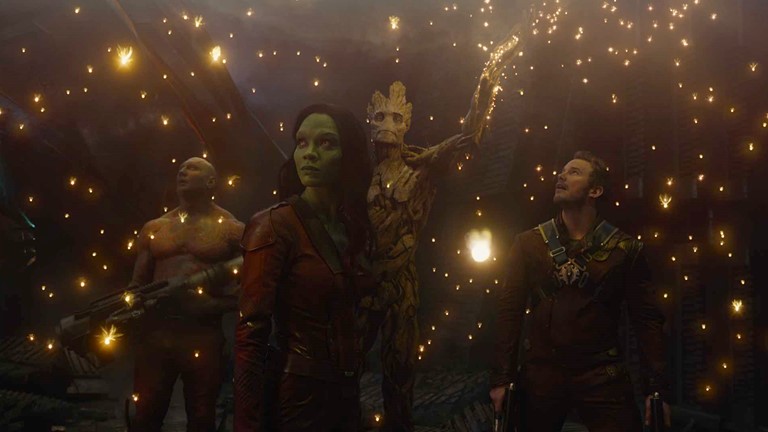 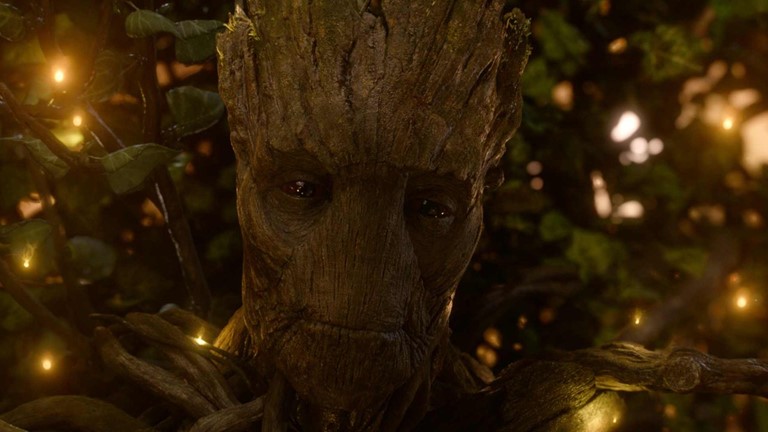 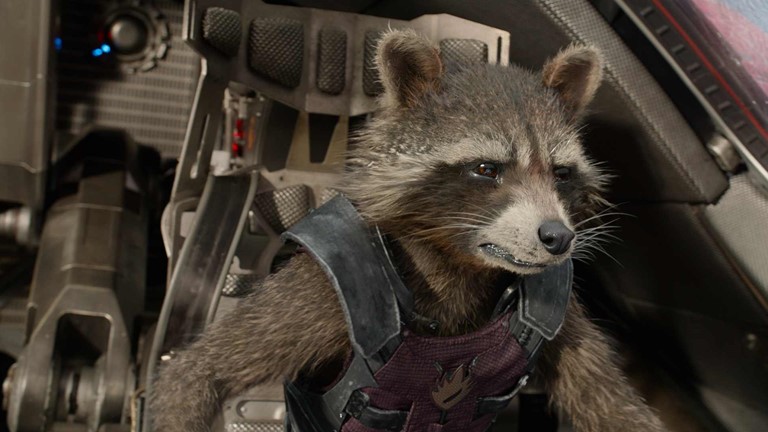 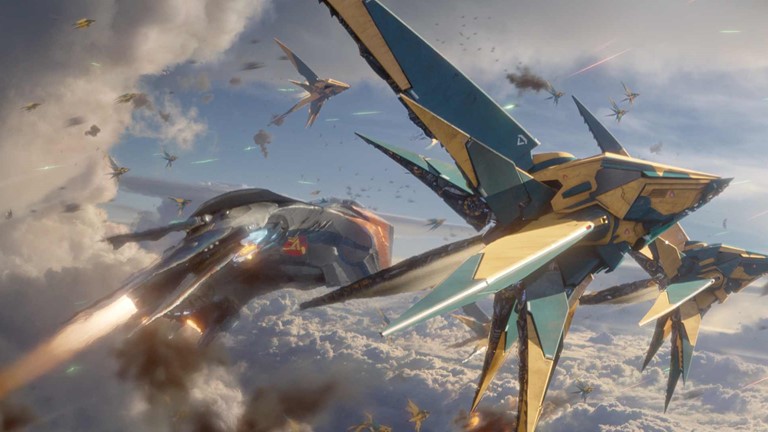 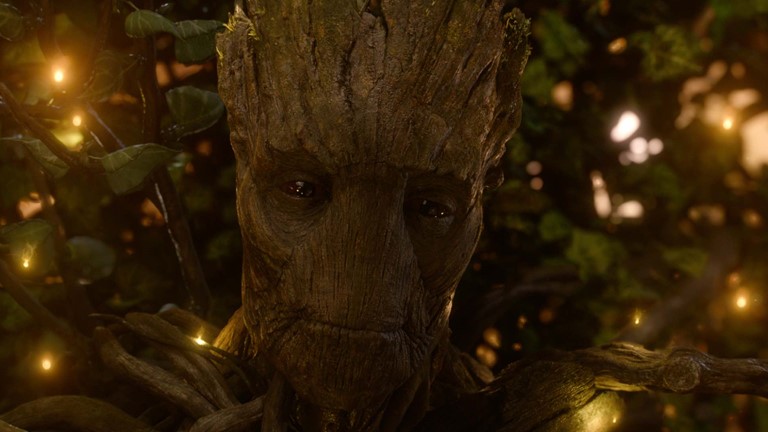 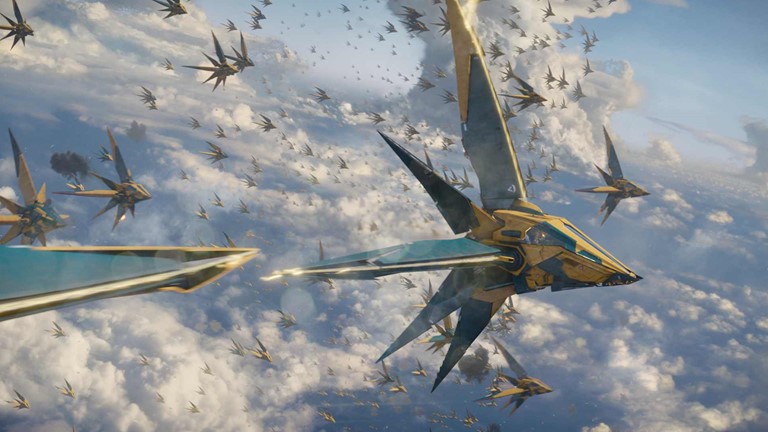 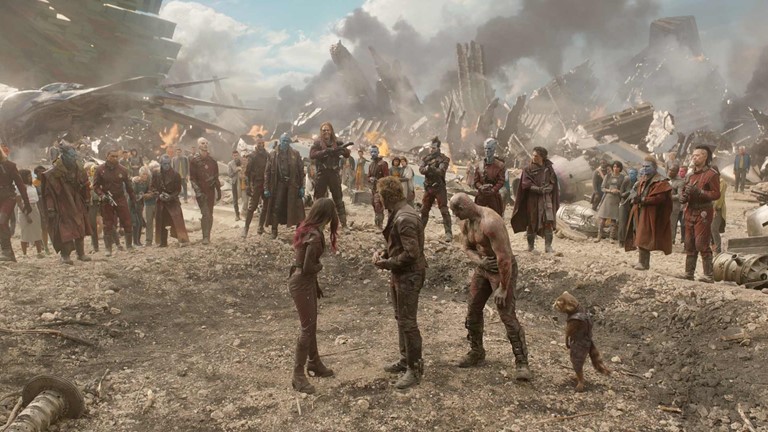