James McAvoy is Victor Von Frankenstein and Daniel Radcliffe stars as Igor in a unique, never-before-seen twist on Mary Shelley’s classic 19th century novel. Told from Igor’s perspective, we see the troubled young assistant’s dark origins, his redemptive friendship with the young medical student Victor Von Frankenstein, and become eyewitnesses to the emergence of how Frankenstein became the man—and the legend—we know today.

The bulk of the award focused on Dr Frankenstein’s first creation and the movie’s main CG creature, Gordon.

Gordon was to take the form of a hideous Monkey constructed by the amalgamation of various animal limbs.

One of the challenging tasks with Gordon was to have him interacting with the main characters, Victor Frankenstein and Igor in a vicious fight.

Another scene undertaken by MPC was the Thames side circus sequence.

Inside the main tent Green Screen plates were integrated with Live Action background plates of the audience watching the films love interest Lorelai perform on the high trapeze.

Outside, an exterior CG tent extension was created as well as an enhancement of the surrounding Victorian city of London environment.

The environment team, created and extended the circus and the surrounding London environments by taking influence from images taken around the turn of the Century, mixed with high res stills from the various locations around present day London. This helped to create and extend the live action plates shot by the production in various locations around London, and Manchester. These included The Houses of Parliament, busy London streets and views of Victorian London from the Thames.

The Climatic Castle Courtyard sequence called for a variation of CG effects.

These included generated exterior shots of the castle, sky replacements, lightening effects, CG ‘sky hooks’ (lightening conductors) and an electrical current, the ‘Tesla Coil’, the current generated by Victor Frankenstein to shock Prometheus in to life.

VFX Supervisor Angus Bickerton was very keen to keep the same feeling in terms of quality of the CG especially since the DP had use uncoated lenses throughout the shoot, which has it’s own characteristics and adds to the visual style of the film. 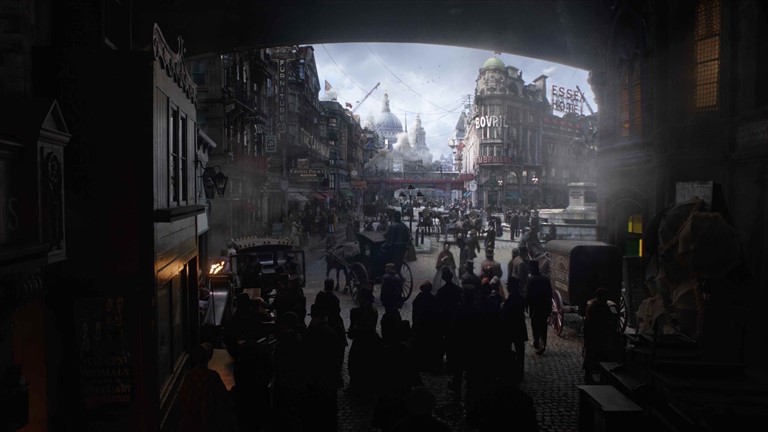