Charlie and the Chocolate Factory

Charlie and the Chocolate Factory, about eccentric chocolatier Willy Wonka (Johnny Depp) and Charlie (Freddie Highmore), a good-hearted boy from a poor family who lives in the shadow of Wonka's extraordinary factory. Long isolated from his own family, Wonka launches a worldwide contest to select an heir to his candy empire. Five lucky children, including Charlie, draw golden tickets from Wonka chocolate bars and win a guided tour of the legendary candy-making facility that no outsider has seen in 15 years. Dazzled by one amazing sight after another, Charlie is drawn into Wonka's fantastic world in this astonishing and enduring story.

MPC carried out an exceptionally wide range of work on the project; on the one hand, they needed to inject life into Willy Wonka’s helpful team of pint sized Oompa Loompas, on the other they needed to create a flowing chocolate river cascading over a ‘choco-fall’… As if this wasn’t enough, there was oompa loompa dance formation, Violet’s blueberry transformation, melting palaces, the jungle based oompa village and the all CG white tunnel ride environment…

Willy Wonka’s team of Oompa Loompas was brought to life through a combination of motion capture techniques and computer animation. In some cases, they had to intercut with live action blue screen oompa’s or actors, so it was very important that the team make sure they appeared 100% photo-real at all times. This meant that skin, hair and cloth simulation had to be perfect.

The Oompa Loompa’s movements are based on the physical movements of actor Deep Roy. These were recorded at an extensive motion capture shoot at Pinewood Studios using MPC’s Vicon MX40 system. Motion data was collected by 24 Vicon MX 40 cameras and later transferred into MPC’s proprietary crowd system – ALICE, where a library of different movements – from walking and running through to dancing and formation acrobatics – was created. Similarly, to ensure that the whole team spoke, sang and moved in the same way, a detailed facial mo-cap shoot was also undertaken.

The same library of movements was attributed to the CG oompas who populate scenes throughout the movie, from the Chocolate room to the TV room. They sing, dance and add life to shots as diminutive CG folk moving around the factory.

For MPC, one of the most exciting aspects of the project was the White Tunnel ride, a two minute sequence which is all CG, i.e. - every element created in computer. There were a number of essential components to the sequence, namely; the chocolate river, the CG rowing boat crewed by a team of CG Oompa Loompas and the creation of digital doubles of the main cast of the movie.

Challenge number one, - the chocolate river - incorporated the creation of ‘PUDDLE’ s system developed for the creation of natural looking fluids. A particularly challenging element of computer animation, the team needed to re-create the properties of melted chocolate and have it appear 100% fluid. With this in mind, MPC’s team of programmers again set about developing proprietary software to achieve the look required. The aim was to create natural looking ripples, waves and movement on interaction with the liquid.

Once the chocolate river was in situ, the rowing boat and incumbent Oompa crew, was modelled and animated in 3D using MPC’s comprehensive character tools with oompa movement added via ALICE. As the sequence is entirely CG, it was necessary to create digital doubles of the cast members which could be similarly incorporated into the shots. All characters required extensive cloth and hair simulations.

To make the obnoxious Violet Beauregarde fill with blueberry juice and roll away, the team used a mixture of 2D and 3D effects. Interestingly, this particular sequence, is a rare example of a full frame CG character – to ensure that she appeared to be completely lifelike cloth and hair simulation were all important. To achieve this, off the shelf packages such as Syflex cloth were adapted to work within the MPC pipeline. Violet’s inflated body was conceived by building a spherical CG body in Maya, this was then amalgamated with either a CG version of Violet's face or where appropriate a live action pass of the actress’ face shot against green screen (with prosthetics) which was then intercut with her CG body..'

The chocolate room sequence is one of the first scenes showing the inside of the world famous Wonka Chocolate Factory and we see Charlie and the other golden ticket winners parading through a vividly coloured grassy world with lollipop plants and other candy scattered throughout. The environment is enhanced by a giant cascade and flowing river of melted chocolate. Digital set extensions augment the physical set, built at Pinewood studios.

Another opportunity that MPC found to exploit ‘PUDDLE’ was the ‘Gloop pipe’ sequence, which sees chubby Augustus Gloop fall into the chocolate river and splash about before being spun in a whirlpool. As Augustus can’t swim Willy orders the huge – fully CG – ‘gloop pipe’ to rescue him. The pipe sucks Augustus into the pipe, out of the lake. Before Augustus is sucked away, oompa loompa’s surround the pipe and perform a Busby Berkeley inspired synchronised swimming routine as part of the formation ‘chocolate room song.’

A number of key shots comprised detailed matte paintings, for example, the oompa village deep in the jungle and the chocolate palace, which we see constructed in all its glory before melting away in the heat of the Indian sun. 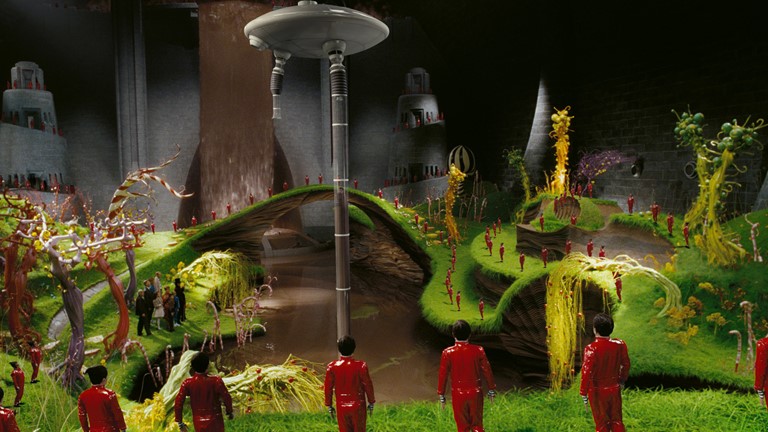 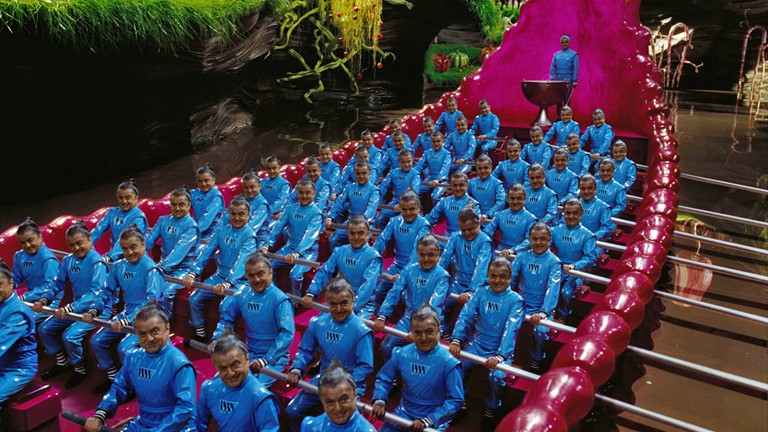 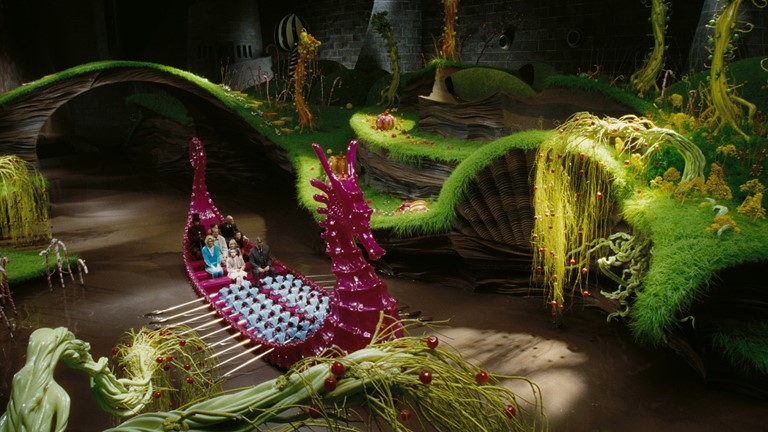 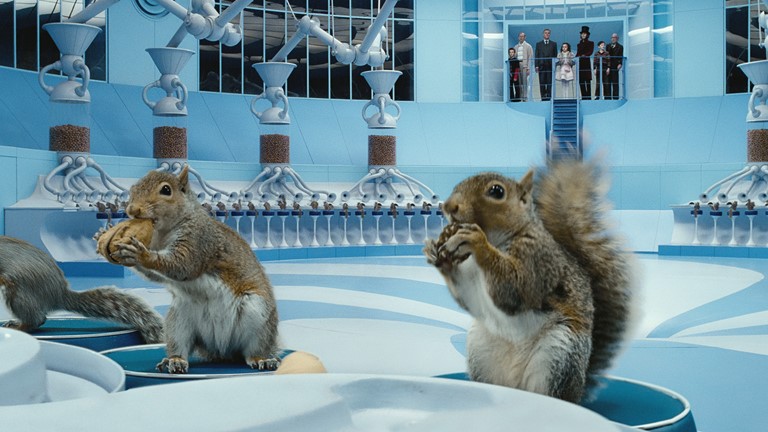 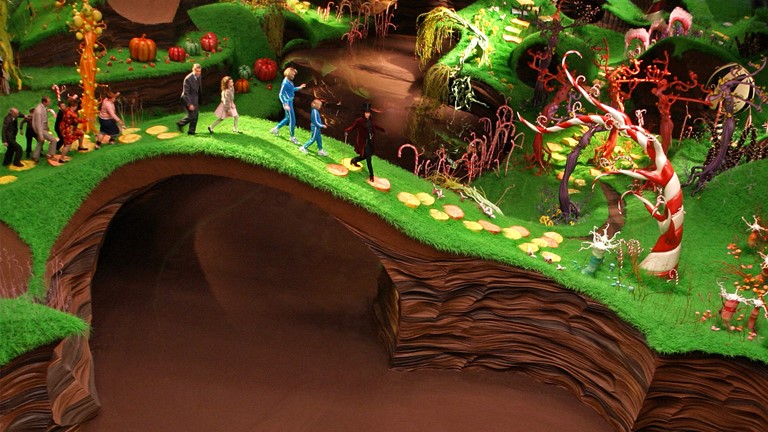