Over 140 effects heavy shots were delivered in record time, and centre on the film's title characters: the alien warriors, hero predator, and massive Alien Queen. Predator spacecraft, an army of 16,000 aliens, digital space and ancient pyramid environments, along with "invisible effects" such as rain, snow and shot-enhancing rubble rounded off the project.

The story sees iconic monsters from two of the scariest film franchises ever battle each other on Earth for first time on film. The discovery of an ancient pyramid buried in Antarctica sends a team of scientists and adventurers to the frozen continent. There, they make an even more terrifying discovery; two alien races engaged in the ultimate battle. The only certainties – it will be bloody and the winner of this battle will not be human…

MPC's work on the project began in October 2003 with animated pre-visualization of key scenes developed by the MPC VFX team. This 'previs' provided a guide for the director, actors and crew during the shoot in Prague, Czech Republic; demonstrating the construction of each shot, and highlighting potential hazards en route.

With the bulk of the work requiring a wide range of digital tricks to create believable character animation the project necessitated a big team. In MPC's soho, London studio, accurate computer models and matching textures were painstakingly built for both the aliens and predators in order to exactly match those of their live-action counterparts.

In MPC's soho, London studio, accurate computer models and matching textures were painstakingly built for both the aliens and predators in order to exactly match those of their live-action counterparts. As only a partial torso and head were built for the Alien Queen, MPC further developed her body, ensuring she was mechanically viable for the intensive action needed for her final rampage sequence.

An epic flashback sequence midway through the film describes the history of the feud between the two legendary species, and how humans got caught in the middle. For this scene, MPC's artists created entire environments, and utilised an extended version of MPC's proprietary crowd software "ALICE" (created for the studio's work on Warner Brothers 'Troy') to create a swarm of over 16,000 squirming alien warriors. In the crowd system, each alien harnesses its own AI, creating selective responses to external factors. 3D environments and digital matte paintings provided the stylistic vision of what might have been.

When Aliens and Predators fight, it gets messy. MPC effects-animators provided the final ingredients: steaming blood, alien saliva, explosive debris and swirling snow storms. This destruction, along with subtler effects like dust and rain, were realized with MPC's set of fluid dynamics and particle animation software; a custom toolkit which allows animators to closely relate the effects to the action of the shot. 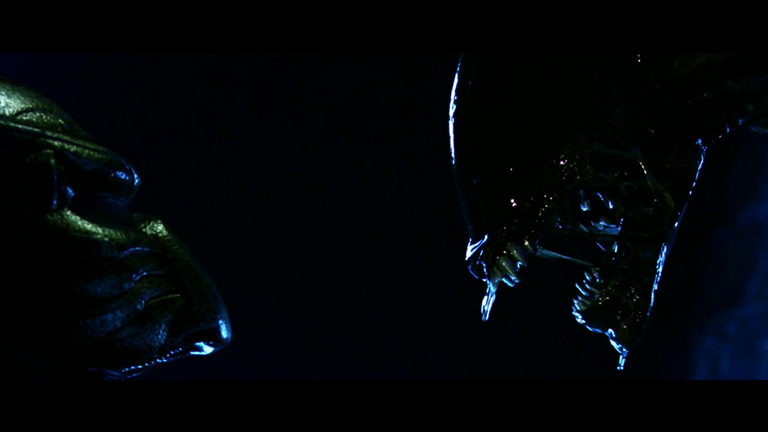