MPC completed visual effects for Intermedia’s ‘Alexander’ directed by Oliver Stone and distributed by Warner Brothers. Colin Farrell stars as Alexander the Great - the King of Macedonia who leads his Greek legions against the giant Persian Empire.

After defeating the Persians, he leads his Army across the then known world venturing further than any Westerner had ever been. His adventures end many miles from home in a bloody encounter with the foreign armies in India. MPC worked predominantly on the 'Elephant Battle’, a 20-minute, pivotal scene in the movie when Alexander’s Macedonian army faces the Persians, led by their king and reinforced by a large group of battle elephants. The overall task was creating the larger part of the Macedonian cavalry riding through a forest of light and shadow and through mid-morning mist, dodging arrows, to finally arrive at the scene and engage in the battle.

During January 2004 MPC attended a two week shoot in Thailand to source reference and texture shots and advise on shooting live action with a view to integrating visual effects shots.

As a prerequisite for the job MPC required accurate horse motion capture data and hired Carriel Thiel, previously a motion capture stunt coordinator for the Lord of the Rings trilogy to work with the MPC motion capture team and assist in the process of getting accurate equine motions and re-enactment of the battle scenes previously shot in Thailand. Carrie worked closely with Artem Digital, who supported the motion capture technical needs at an equestrian centre near Salisbury, Wiltshire UK.

The elephant battle also required general enhancement of the brutality of the battle, which meant adding a whole group of full-screen elephants, traditional cloning of hundreds of extras, whole volleys of arrows, individual arrows killing soldiers, blood spurts, swords slashing through bodies and not least a complete Persian elephant head with armour and trunk, which would get nearly severed in the heat of the battle.

Following the motion capture of horses, MPC arranged for a second, week-long shoot at Black Island Studios Westway to capture the bespoke data required for the specific behaviour of the battling soldiers in and amongst marauding cavalry and elephants.

For this shoot and to complement the existing wealth of knowledge and experience with motion capture, MPC purchased a Vicon MX motion capture system - a next-generation suite of real-time optical mo-cap equipment. MPC provided all the services and technical support required for a full motion capture facility enabling them to really push the envelope of the pre-existing motion capture pipeline developed during ‘Troy’.

In the next step the captured and edited data would be piped into MPC’s in-house crowd simulation software ALICE. This tool takes motion capture information and feeds it into a bespoke virtual-reality engine which ultimately creates information to be rendered as photo-real, dynamic agents. Recently used to conceive battling warriors on an epic scale for ‘Troy’ and packs of swarming aliens for 'Alien vs Predator’ - the solution now needed to accommodate horses and other four-legged creatures.

The result was artificially intelligent equine agents that could react to different stimuli and physical surroundings. Once these the agents ‘existed’, a team of 3D artists added the dynamic horse hair and skin required to bring the animals to life. In-house cloth simulation techniques ensured that warriors’ costumes and horse tack moved with the horses and behaved realistically.

A striking section of the sequence exploits Alexander’s fear of death - realising that his life was to change forever, Alexander charges into battle to save his failing armies and gets almost mortally wounded in the process. To illustrate how this great warrior’s world and outlook changes Oliver Stone decided to shoot particular scenes of the battle using infra-red technology. MPC’s 2D artists had their work cut out to match all the CG into the live-action plates, horses with manes, riders, billowing coats, hundreds of extras and a whole forest had to be ro-toed out. When the battle wasn’t shot on infrared film stock, DP Rodrigo Prieto had already subjected the traditional negative stock to a bleach-bypass process, which had altered the normal colour palette considerably and meant a further challenge for everyone on the project. 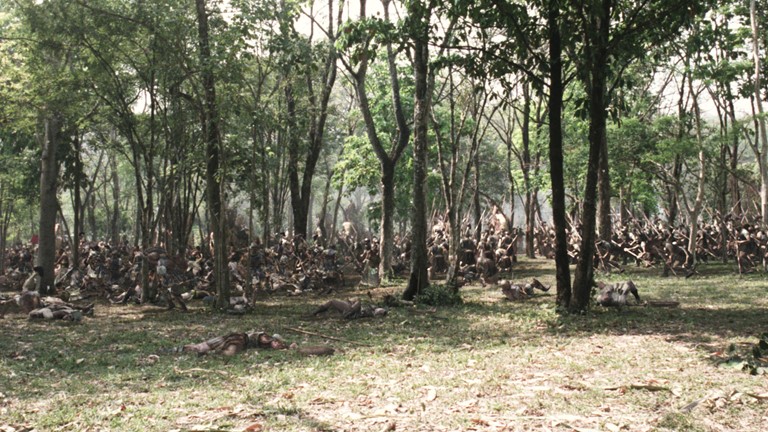 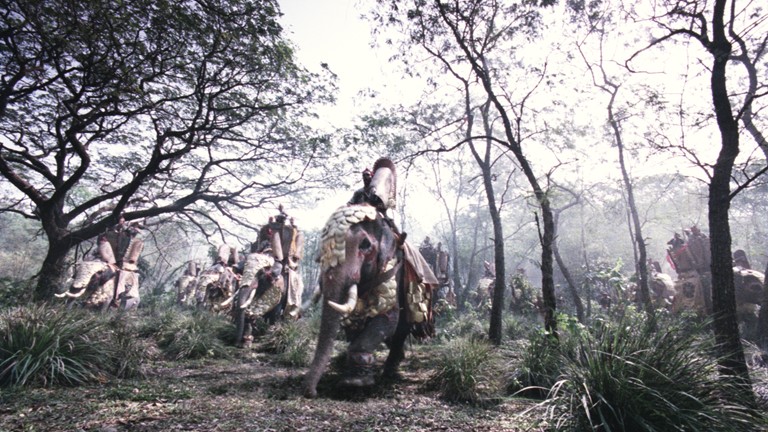 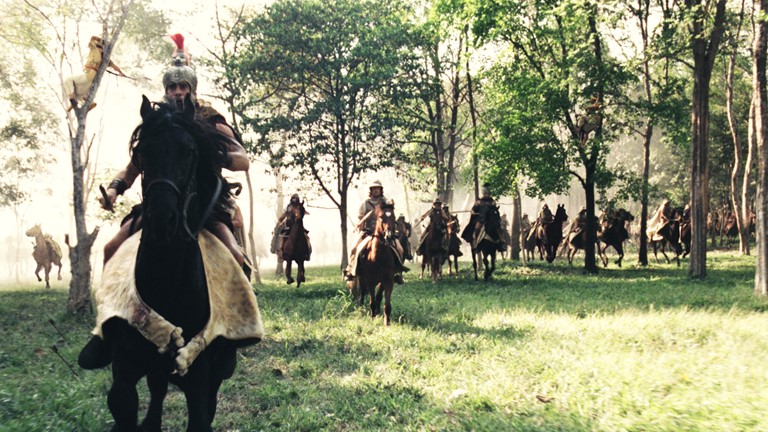 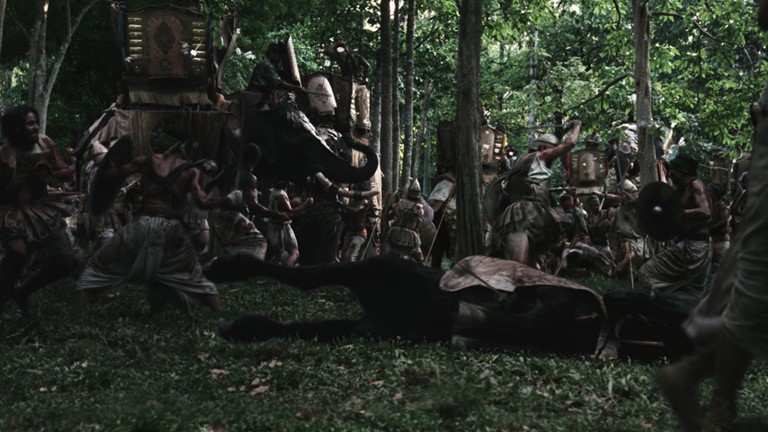