The Nature Conservancy, This is Our Future


In a close collaboration beginning early this year, MPC teamed up with renowned global conservation organization The Nature Conservancy to help launch its new “This Is Our Future” campaign with a real-time interactive Oculus Rift and Gear VR experience. The art gallery-inspired VR piece debuted October 6th at a Conservancy hosted influencer event in San Francisco. “This Is Our Future” features a series of Kickstarter-like campaigns to make immediate proven impacts on global threats to people and nature, and the tuna fishery in the western and central Pacific marks the first. Ambassadors for the campaign include Matt Idema from Facebook, engineer Tray Chao, Anthony Goldbloom from Kaggle and cultural influencer and artist Yosi Sergant.

The Pacific tuna fishery, one of the world’s largest, is suffering from illegal and unsustainable fishing practices which are depleting tuna stocks, killing vulnerable species like sharks and turtles and robbing the economies of small Pacific island nations. The first campaign aims to transform the Pacific tuna fishery through technological intervention—tech-enabled monitoring to know what, where and how much is being caught in the fishery and tagging that data the same way friends get tagged on Facebook. (To review the enormous amount of visual data, The Conservancy will launch a machine learning tech challenge on Kaggle.com November 14th.)

“As we developed the VR experience with The Conservancy and agency Enso who worked on early concepts and scripts, we spoke a lot about ‘cautious optimism,’” explained MPC co-directors/creative directors Alan Bibby and Andrei Juradowitch who also brought to bear a background and interest in sculpture and architectural design. “We wanted people to be aware of the scale of the issue, but without making them feel like there was no hope. We all wanted the viewer to come out of the experience feeling like there was the potential to change the world, and that they had the possibility to be that change. Activating and inspiring the viewer was key.”

The Conservancy and MPC created a VR experience that imparts understanding of the problem and the need for funding tech-enabled monitoring. The experience takes the viewer on a journey through huge scale gallery spaces where they can see the problems facing the fishery via a poetic and emotionally engaging series of sculptures that communicate information through the viewers’ actions, a conversational voiceover by Kieran Culkin and directional sound design by Q Department.

“We wanted Kieran’s voiceover to feel like he was having an intimate conversation with you,” Bibby said. “It’s as if you were talking to a friend or curator as you walk through a gallery, and they’re explaining something to you, not lecturing you. We also worked tightly with Q Department to create sound that not only created atmosphere, but also was spatial in terms of directionally leading the viewer around the gallery in a way that wasn’t prescriptive. Instead of telling them to look up, we’d use sound to make them intrigued to look up. It becomes the viewer’s idea.”

Juradowitch explained, “We wanted to educate without being dry or accusatorial, inspire and create change, and use the medium of VR in a way that made sense for us to use it. It was also a way for The Conservancy to engage with the technologically savvy demographic they are speaking to.”

The VR experience is a real-time engine-based piece that uses a non-photographic approach, and was built using game design software Unreal Engine. “This is a piece that could not have been created as a pre-rendered video, not only because of the interactivity, but also because the compositions themselves relied on positional tracking,” explained Andrew Cohen, MPC’s Lead Artist on the VR experience. “We took advantage of Unreal’s procedural capabilities—different things will happen for each viewer and each time.

“We decided to embed moments of interactivity such as gaze control which enable the user to look at a certain object and get a reaction. For example, when the viewer looks at the iceberg hulls, they break apart and we can see inside them. The experience gives viewers the opportunity to explore personal trajectories in an abstract, engaging way, while at the same time discovering and learning to give them a sense of empowerment.

“Another interesting part of our approach technically was with the sculptures of humans in the first and last scenes,” Cohen continued. “Because we wanted to capture a real, authentically human sense, we 3d scanned real people we knew, and then in ZBrush sculpted on top of them to make them look as if they were handmade. All of the other elements were also sculpted in ZBrush by Butch Belair, an incredible sculptor and 3d artist here at MPC. The unique feel of the piece is due in large part to his vision.”

“This collaboration gave us the opportunity to create the type of real-time interactive experience we’re interested in seeing,” concluded Tim Dillon, Executive Producer, MPC-VR. “We are using virtual reality and experience design to highlight issues that sometimes don’t get the focus they deserve. In this new medium, we’ve got people’s undivided attention.” 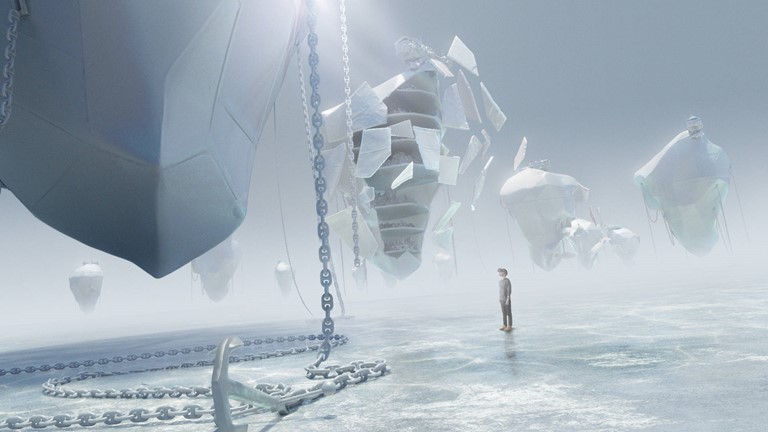 Director of the Indo-Tuna Program