Rob and Nick Carter: Transforming  presents a body of work that reengages with art of the past, harnessing the most cutting edge new media to create sustained engagement with old and modern masters. The exhibition is held at the Fine Art Society, London from the 4th October - 2nd November 2013.

MPC have collaborated with the artists on six ground breaking artworks, including four ‘digital paintings’ that come to life before the viewers eyes; and two bronze sculptures created via a complex 3D modeling and printing process. MPC have also created an installation within the exhibition itself, allowing visitors to go behind the scenes of the works, interacting with them and discovering how they were created.

Jake Mengers, Creative Director 3D, MPC Advertising said, "Branching out into a new genre in the art world felt like a natural progression for MPC and our high end VFX artists. From creating the most complicated bronze in the world, to an intense study of anatomical decomposition; the pieces are a result of meticulous research, thousands of hours of work and a fantastic artistic collaboration. Rob and Nick are amazing to work with, and over the years they have become great friends. The works are a testament to their unique vision.”

The focus for Rob and Nick Carter’s body of work is “Transforming Still Life Painting” (2012). This ‘digital painting’ brings to life an oil painting from 1618 by Ambrosius Bosschaert the Elder. It creates a rare intersection between Old Master connoisseurship and contemporary new media art. It is on permanent display at the Manchester Museum of Art and has been accepted into the Mauritshuis permanent collection. To ensure absolute detail and realism the VFX team studied thousands of hours of nature footage, in order to capture every subtlety and nuance surrounding events of a 24-hour cycle in the life of the bouquet.  Approached as an animated time-lapse sequence over a three-hour loop, a huge database of hand-animated footage was created for every flower in the original painting, as well as creatures including butterflies, ladybirds and flies.

Joining it will be three new time based media works that also adopt an old master painting in a groundbreaking form of homage. “Transforming Vanitas Painting’” (2012-2013) is based on the 1630 oil on copper “Dead Frog with Flies” by Ambrosius Bosschaert the Younger and depicts the scene from the last few minutes of the creature’s life- extending through the various stages of decay to its ultimate decomposition.

Working with the artists, MPC’s challenges fell into three areas: firstly, extrapolating the story beyond the painting in keeping with the original artwork. Secondly, to introduce flies and maggots with believable behavioural attributes, which were assigned intelligence and algorithms such as the ability to avoid each other and be attracted to the most decomposed parts of the skin.

And finally to retain the unique loose painterly style, evident in the original masterpiece, throughout the new 3D moving artwork.

In perhaps their most anticipated endeavour yet, the artists and MPC have also taken on the challenge of Giorgione’s Sleeping Venus in “Transforming Nude Painting” (2013). The scene has been brought to life, transporting the viewer to the Venetian landscape where Venus peacefully sleeps as the day passes through to night. The piece has been produced and presented using innovative new Ultra HD/4K technology, which was still in development at the commencement of the project. The artwork marks a breakthrough in the employment of digital rendering and sculpting, blending live footage of a sleeping model with digitally generated imagery.

“Transforming Diptych” (2013) by Justus Juncker (1765) is unique yet again, as it depicts two separate fruit still life paintings, which are deeply interconnected. MPC digitally replicated the paintings environment to provide a static 3D setting and matching light source, while the insects were brought to life in 3D and their behaviour designed to mimic reality. The two paintings communicate with each other enabling the insects to fly from one piece to the other, seemingly through the frames that separate them, further conjoining the two works. In addition, flight sequences are selected at random from a huge database so that each moving moment is bespoke.

In a departure from animated digital paintings, MPC also worked with the artists to turn 2D paintings into three-dimensional digital files. These files were then given form using 3D printing, forming the basis for a lost wax bronze – allowing for a level of detail and delicacy not possible even 2 years ago. “Sunflowers” (2013) gives an entirely new, sculptural form to Vincent Van Gogh’s masterpiece. The finished sculpture is one of the most complex and detailed bronzes ever produced. “Black Tulip” (2013) is based on a watercolour of a red tulip by Judith Leyster from 1643 and is stunning in its detailed and fragile form.

Read in-depth about each artwork in "More" tab above.

The project has garnered global attention, appearing in both creative, design and VFX press. Read some of the press coverage below: 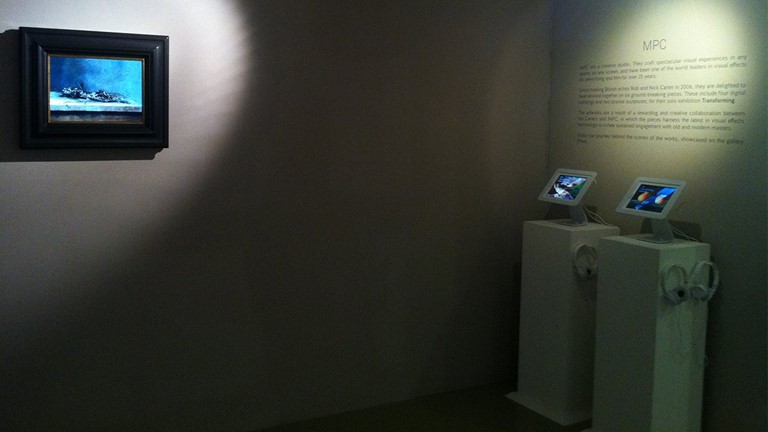