The spot from InnoceanBerlin and directed by MJZ’s Dante Ariola, showcases for the first time Hyundai’s enterprising past. It begins with the Nexo, the latest fuel-cell car, arriving on the scene, after which the film reels backwards in time to show all that preceded the present day.

MPC reveals an exclusive behind the scenes film showcasing the scope of production work that was involved in bringing the campaign to life.

MPC VFX Supervisor Jessie Amadio said: “Most of the spot is played in reverse, showcasing special moments like slo-mo Phantom close ups and sprawling time-lapse wide shots. Following through on this mechanic meant we had to keep in mind the era-appropriate details for each shot and double check the logic and continuity of our animation regularly”.

A standout element of the spot is the flawless CG recreation of the vintage 1975 Pony Mark I. With this being an older car, the team didn't have access to any CAD data, so they had to model based on limited photographs and a very handy blueprint they were able to find in a vintage mail-order catalog.

The elaborate city time-lapse scene proved to be one of the more challenging shots, and MPC were involved early on in developing how it would look. “During the shoot, we worked up style frames and designed a previs Dante was happy with. This became the foundation of the shot which guided us through the extensive asset build to the final comp” said Jessie.  A massive amount of modeling and continual creative refinement was needed to achieve the level of detail required in such a wide shot. While the rest of the job was done in Maya, the team migrated this shot to Houdini for faster scene management. “Our artist set up a pretty interactive system for scattering the layout, controlling the animation timing, and procedurally deconstructing each building. Combing the CG buildings and flora with 2D elements from DMP and a time-lapse stills camera from set, we were able to derive a fairly complex final image” explained Jessie.

The team at MPC were able to lead creatively in many of the environment extensions such as the design of the final packshots and the bridge sequence environment. The bridge building sequence was shot on location in Bangkok, but with 80% of the plate needing to be replaced, the artists were left to set the look of the environment and bridge construction elements. Jessie added: “In the wide shot of the bridge, we created a clean plate of the water, projected a digital matte painting of the opposite shore, augmented the bridge with CG construction elements and re-populated the road with continuity action”.

This is the third campaign that MPC has worked with Ariola on – they recently teamed up for the BMW spot “Legend” and for Michelob Ultra’s Super Bowl spot “Robots”. Describing the partnership, MPC Creative Director Michael Gregory said: “We loved working with Dante to bring his unique vision to life. The creative partnership works so well because Dante and the team are open to our suggestions and creative input. It was great to be involved from the beginning to help craft and shape the visual effect shots and then to see the incredible end result.” 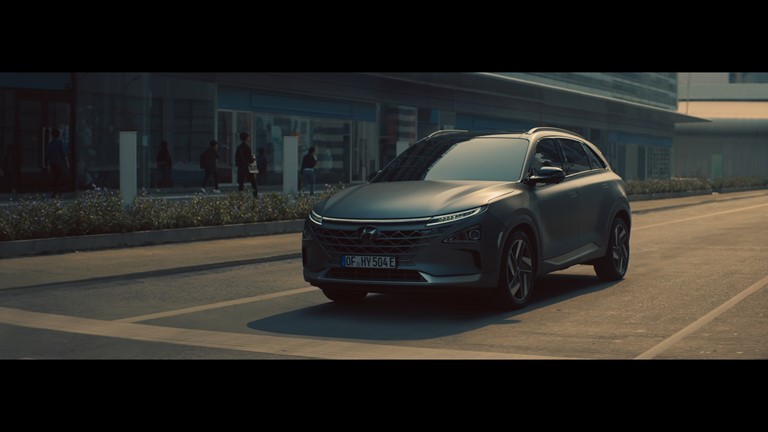